Joe Brennan: short selling allows for alternative views in a market and improves its efficiency 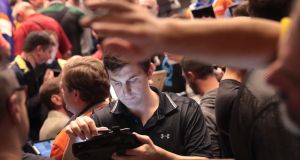 Financial regulators in countries like Germany, Italy and the Netherlands may move to temporarily ban a practice where investors can bet on shares falling in value – known as short selling – in the event of any market panic about a disorderly Brexit.

As UK members of parliament gather at Westminster this weekend for the first Saturday sitting of the House of Commons since Argentina invaded the Falkland Islands in 1982, financial markets – and their regulators – are on edge.

The type of EU withdrawal deal on which MPs will vote – taking the UK not only out of the EU, but out of the single market and the customers union – is the hardest of hard-Brexits envisaged at the outset of the roller-coaster ride.

But after three years of political turbulence that has tested the EU’s patience with the UK, British voters’ faith in their politicians, and hampered business activity and investment across these islands, the definition of the worst-case Brexit has shifted to the UK crashing out of the union without a deal.

That’s why we’ve seen sterling rally by more than 7 per cent against the dollar the since Taoiseach Leo Varadkar and British prime minister Boris Johnson emerged from a tete-a-tete in the grounds of a Merseyside country manor last week to declare they saw “a pathway” to an accord.

Dublin’s Iseq index, which has become the main stock market proxy for Brexit sentiment, has also rallied by almost 6 per cent since then, led by banks and housebuilders, as Johnson confounded his opponents by clinching a deal with the EU on Thursday. It replaces the controversial Northern Ireland backstop with a fudge that would keep the six counties legally in the UK customs territory but de facto in the EU’s.

Investors, of course, have long learned to ignore the FTSE 100 for a read on Brexit developments, as it has, perversely, tended to benefit from negative headlines. Any sterling wobble helps the index’s big exporters like British American Tobacco, drinks giant Diageo, and Unilever, the maker of household brands from Domestos bleach to Hellmann’s mayonaise.

Now comes the hard part for Johnson as he faces a House of Commons, which three times shot down Theresa May’s withdrawal agreement. The parliamentary arithmetic is not in his favour, with his confidence-and-supply partners in the Democratic Unionist Party (DUP) having aligned themselves with the three main opposition parties in vowing to vote against the deal.

Johnson’s hopes now rest on twisting the arms of members of the group of 21 former MPs that he booted out of the party last month for backing the Brexit-delaying Benn Act, as well as a number of Labour MPs from Leave-voting constituencies who are prepared to defy party leader Jeremy Corbyn.

Failure to get deal across the line could lead to market chaos. While Johnson’s government has confirmed that it will comply begrudgingly with the Benn Act and seek an extension and most EU leaders would be inclined to grant extra time, it is far from certain. Even if more time is given, you’re into general election territory, carrying additional risks.

Reuters reported this week that financial regulators in countries like Germany, Italy and the Netherlands may move to temporarily ban a practice where investors can bet on shares falling in value – known as short selling – in the event of any market panic about a disorderly Brexit.

It would evoke memories of the financial crisis, when a number of countries, including Ireland, stopped short-sellers from targeting banking stocks.

The practice involves traders borrowing shares from long-term shareholders in a company and selling them. The hope is that the shares will fall in value before the trader moves back into the market to buy them and return them to the original shareholder. The trader pockets most of the price difference.

The Central Bank here is keeping its powder dry on whether it is considering a ban on short selling if the markets turn ugly this time round.

“Authorities across the EU, including the Central Bank of Ireland, have taken significant steps to mitigate the most material cliff-edge risks of a no-deal Brexit,” the bank told this column.

“This work will continue up to and over the course of a UK exit from the EU, with the focus throughout being to ensure the continued integrity and orderly functioning of financial markets, including in a hard Brexit scenario.”

It would do well to avoid such a panicked knee-jerk move. Facilitating short-selling – viewed in some quarters as a murky practice beloved by nasty hedge funds – actually allows for alternative views in a market and improves its efficiency.

There are numerous cases where short sellers helped to ferret out misconduct in companies internationally, or spotted cases of unclothed corporate emperors that others in the market missed or chose to ignore.

Let’s not forget that top executives at Anglo Irish Bank, which would prove in time to be hopelessly insolvent, were among the loudest voices calling for a restriction on short-selling in September 2008, when a rattled regulator chose to act.

Of course, short-sellers may contribute to an initial overreaction by shares to shock development – like a chaotic Brexit. But they too stand to get burnt, too, if they over do it.