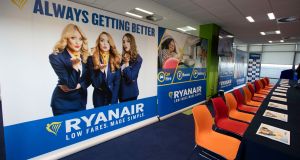 Ryanair moved 1 per cent lower to €14.45, as investors digested news that the High Court in Dublin had rejected the carrier’s attempt to prevent operations chief Peter Bellew from joining rival EasyJet in January.

European shares dipped slightly on Monday amid thin volumes as traders adopted more cautious positions in the run-up to the Christmas break following a run by the pan-European Stoxx 600 index to a record-high close on Friday.

Ryanair moved 1 per cent lower to €14.45, as investors digested news that the High Court in Dublin had rejected the carrier’s attempt to prevent operations chief Peter Bellew from joining rival EasyJet until 2021, saying a 12-month non-compete clause was unenforceable.

The FTSE 100 rose 0.5 per cent to hit its highest in nearly five months and match its best run of gains since May 2017.

The stand-out gainer was NMC Health, which surged almost 37 per cent on its best day ever after it promised an independent review of its books. Its shares had nearly halved in value last week after short-selling firm Muddy Waters questioned its finances.

“The fact the company is taking such action implies they don’t have anything to hide, which has encouraged some traders to swoop in and snap up the relatively cheap stock,” CMC Markets analyst David Madden said.

Dealers seemed content to reflect on major developments of the month, including a breakthrough in US-China trade talks and UK prime minister Boris Johnson’s election victory which have helped the FTSE 100 surge nearly 5 per cent in the last two weeks.

Some of that momentum has eased after Johnson’s hard line on a trade agreement with the European Union revived fears of a chaotic Brexit and market players are likely to hold off on making further bets before the new year.

Lingering Brexit concerns left sterling hamstrung on Monday, boosting firms with a larger international exposure such as Shell, Unilever and Diageo, which lent further support to the main index.

On Saturday, a report said the Italian government had provisionally approved a document to make it easier to revoke concessions to operate motorways. The decree does not mention Atlantia, but a government source told Reuters that the measures could be applied to it.

Lufthansa dropped 1.3 per cent after German cabin crew union UFO said arbitration talks with the company had failed and its members could stage strikes any time from now on, barring December 24th, 25th and 26th.

The S&P 500 and the Nasdaq hit fresh record highs on Monday as US president Donald Trump said an initial US-China trade pact would be signed “very shortly”, while Boeing was a big boost to the Dow after the planemaker fired its chief executive officer.

“Boeing is a tailwind for the markets for the day. It will be pretty quiet this week and probably going into year end,” said Keith Gangl, portfolio manager of Gradient Investments in Minneapolis, Minnesota.

Apache jumped after the oil and gas producer said it had formed a joint venture with France’s Total to develop a project off Suriname. – Additional reporting, Reuters