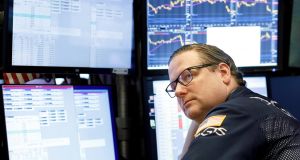 The S&P 500 and Nasdaq extended a record rally on Wednesday, even as FedEx limited gains after cutting its annual profit forecast for the second time this year. Photograph: Justin Lane/EPA

Renewed concerns over a no-deal Brexit caused European shares to post a mixed result on Wednesday, with the Iseq outperforming peers, rising 0.22 per cent.

Hotel group Dalata was among the biggest losers on Wednesday, falling 6.32 per cent to €5.48 on the back of a trading update which detailed a poor second half to the year in the company’s key market, Dublin.

Budget airline Ryanair was the biggest gainer on the smaller Iseq 20 index, advancing 1.68 per cent to €14.52. That’s despite the fact the airline is one of the Boeing 737 Max’s biggest customers with a firm order for 135 of the craft. Boeing said earlier this week it was suspending production of the Max following two fatal crashes.

Property names had a mixed day with I-Res Reit falling 0.38 per cent to €1.57 despite data from the Residential Tenancies Board noting that rents rose 8 per cent in the third quarter of this year. Housebuilder Glenveagh rose 0.51 per cent to €0.79.

Banks were still volatile a day after the Bank of England increased its capital reserve requirement on Monday. AIB increased 1.15 per cent on the day to €3.17 while Bank of Ireland fell 1.14 per cent to €4.85 per cent.

In other stocks, a relatively minor share sale by a Kingspan director pulled the company lower by 0.75 per cent to €53. Flutter closed the day up just 0.14 per cent at €104.75 after US private equity company CVC sold a portion of its shareholding in the stock.

Pearson rose 1.71 per cent after it said it would exit the consumer publishing space and that its chief executive would leave. The company also said it is selling its 25 per cent stake in Penguin Random House for $675 million.

NMC Healthcare rebounded slightly, a day after a short attack from Muddy Waters wiped off nearly a third of its market value, leading to its worst day on record. The UAE-based group stood by its 2019 and 2020 targets, sending its stock up as much as 10 per cent. It closed down 1.06 per cent.

Shares in Volvo gained 3.56 per cent after Japan’s Isuzu Motors agreed to buy Volvo’s UD Trucks business and tie up with Volvo to cut costs and develop electric and self-driving technologies.

Among other stocks, Peugeot maker PSA rose 1.36 per cent after Fiat Chrysler and the French carmaker agreed on a binding merger in a $50 billion deal. Shares in Swedish bank SEB slipped 1.69 per cent after the country’s financial regulator said it had taken its investigation of anti-money laundering controls at its Baltic operations to a new level.

Shares in French drugmaker Ipsen, among the worst-performing healthcare stocks on the Stoxx 600 this year, fell 4.07 per cent after the company announced the departure of its chief executive.

The S&P 500 and Nasdaq extended a record rally on Wednesday, even as FedEx limited gains after cutting its annual profit forecast for the second time this year.

FedEx shares were set for worst day since September after the US parcel delivery company cut its fiscal 2020 profit forecast on heavy expenses, slowing global trade and the fallout from its breakup with Amazon. com.

The healthcare sector was boosted by Eli Lilly, which gained after Morgan Stanley upgraded the stock to “overweight”.

1 Eason acquires rival Dubray Books for undisclosed sum
2 Solar panels: Are they worth the investment?
3 Bank leaked my loan request to family who tried to rip me off
4 Fuel company loses €1.3m challenge over tax bill
5 When the Chemistry no longer works – the closing of a leading Irish ad agency
6 Up to 5,000 engineering jobs expected to be created in 2020
7 Ryanair and Aer Lingus monitor impact of coronavirus on travel to Italy
8 Stock markets tumble into the red for second straight day
9 Longview seeks permission for 753 homes in Cork’s outskirts
10 Can I see my father’s previous wills?
Real news has value SUBSCRIBE