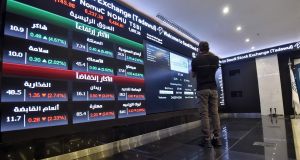 The Riyadh’s stock exchange board.

Saudi Aramco’s shares rose 10 per cent during its second day of trading on Thursday, pushing the state oil group’s valuation above $2 trillion (€1.8 trillion).

Shares climbed by the maximum daily limit to SR38.7 before profit-taking pushed the price down to SR37.3, according to the website of Riyadh’s Tadawul stock exchange.

A $2 trillion valuation for the company has long been sought by Saudi Arabia’s ambitious crown prince Mohammed bin Salman, and Riyadh has worked to backstop the flotation to ensure its success.

The kingdom issued bonus shares and made bank loans available for retail investors, pressured wealthy families to buy in and encouraged state funds to keep some money aside to prop up the flotation in the after-market.

Foreign institutions had previously balked at the $2 trillion valuation expectations, amid fears over governance and security. The tepid response forced Saudi Aramco to abandon plans to market the offering globally and scale back the size of the stake to 1.5 per cent.

On its Wednesday debut, the stock also rose 10 per cent to SR35.2 as heavy local and regional demand, including from funds in Abu Dhabi, led to the IPO being nearly 4.7 times oversubscribed.

The company raised $25.6 billion, making it the world’s largest initial public offering, surpassing the $25 billion raised by China’s Alibaba when it debuted on Wall Street in 2014.

However, bankers said that only a fraction of Saudi Aramco shares changed hands on Wednesday, roughly 1 per cent of the company’s free float, which is far below the average amount of trading expected in a newly listed company.

With much of the shares held by retail investors who have been incentivised not to sell, even a small amount of buying can push Saudi Aramco’s price higher quickly.

The higher valuation also means the dividend yield for Saudi Aramco is far lower than other listed international oil companies – which has been another concern for global fund managers who invest in energy stocks.

“Aramco should trade at a discount rather than premium to international oil majors,” said analysts at Bernstein, citing corporate governance concerns. “We rate Saudi Aramco as underperform.”

The listing will also be supported by global funds who are expected to buy shares in Saudi Aramco ahead of its inclusion in global emerging markets indices tracked by institutions.

Several hedge funds, seeing the listing as an effective one-way bet, have bought shares, with the intention of selling out once they hit the $2 trillion mark, people familiar with the matter have said. – Copyright The Financial Times Limited 2019

1 Opioid executive admits to ‘no morals’ ahead of prison term
2 Are there annual limits on inheritances or gifts to a child?
3 Who are Ireland’s 17 billionaires?
4 American YouTubers embrace the crisp sandwich
5 ‘If you don’t like challenges, you should not be in the airline business’
6 My father in a nursing home wants to gift me his house
7 NI businesses fear burden of post-Brexit red tape on goods transport
8 From chips to €14bn in trade: Ireland and Italy’s enduring exchange
9 Parties shred pension reform in pursuit of votes
10 South Dublin Credit Union members urged to borrow more to ensure survival
Real news has value SUBSCRIBE