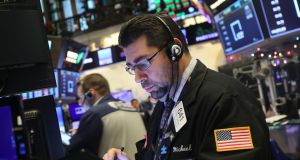 US stocks opened largely unchanged on Thursday as investors shrugged off a dip in jobless claims.

European shares inched up in thin trade on Thursday, as a handful of corporate updates and central bank meetings gave little impetus for larger moves. Markets held slightly below highs touched earlier in the week when a Sino-US trade agreement and a victory for the Conservatives in a UK general election spurred buying.

Renewed fears of a no-deal Brexit, brought about by prime minister Boris Johnson’s setting of a hard December 2020 deadline for a trade deal, lent an air of caution as investors looked to the new year for fresh cues.

Hotel group Dalata was down 4 per cent to €5.25 after falling 6 per cent in the previous session on foot of a trading statement which pointed to a poor second half of the year in its main trading market, Dublin. Dalata has been one of the best-performing public companies in Ireland in recent years, but investor confidence suddenly weakened this week after the company highlighted “tougher-than-anticipated market conditions” in Dublin.

Ryanair was marginally up at €14.60 ahead of a High Court ruling on Monday on whether or not its departing chief operations officer Peter Bellew can join the airline’s British rival EasyJet next month.

Kerry was up 1.8 per cent at €112.40 as investors digested the import of missing out on the opportunity to buy the nutrition business of US chemicals group DuPont. The €23.5 billion deal would have seen Kerry double in size and jump over CRH as largest firm on the Iseq. Bank of Ireland and AIB were up marginally at €3.19 and €4.87, consolidating gains earlier in the week.

London’s exporter-heavy FTSE 100 hit a more than four-month high on Thursday, partly in response to a weaker pound, which came under pressure from fears Britain may leave the European Union without a trade deal at the end of 2020.

The FTSE 100 was up by 0.4 per cent, rising for the seventh straight session. The euphoria around Boris Johnson’s win carried into this week but was soon overshadowed by fears of a chaotic Brexit after the government set a hard deadline of December 2020 to reach a new trade deal with the European Union.

That pushed sterling to two-week lows, helping blue-chip companies with a big international presence, such as Unilever and AstraZeneca, rise.

It was a quiet day on the corporate news front, but Just Eat shares saw some action, ending 1.2 per cent higher after Prosus and Takeaway. com served up their final offers for the British online food delivery group.

The benchmark Stoxx 600 index was just 0.1 per cent higher, with healthcare and oil stocks leading gains, while automobile stocks were the worst performers.

“It’s very much a period of digestion of [last week’s] news, and maybe thoughts for 2020, rather than anybody looking to do much before the year end,” said Roger Jones, head of equities at London and Capital Equity Solutions and Equity Funds.

Italian payments services provider Nexi rose 4.7 per cent and was the top gainer on the Stoxx 600 after lender Intesa Sanpaolo agreed to sell it its payments business for €1 billion. Swiss speciality chemicals maker Clariant rose 2.1 per cent after saying it was selling a unit to US-based PolyOne Corp for $1.6 billion.

UGold was little changed and the dollar was roughly flat as investors awaited US gross domestic product data tomorrow and investors shrugged off a report showing US factory activity in the mid-Atlantic region has nearly stalled this month.

Stocks got a boost after US treasury secretary Steven Mnuchin said the United States and China would sign their Phase One trade pact at the beginning of January.

MSCI’s gauge of stocks across the world gained 0.19 per cent, lifting the global benchmark to a record high, while the three major equity indexes on Wall Street hit intra-day and closing record highs.