Brent crude, the international benchmark, falls 1% to just above $60 a barrel 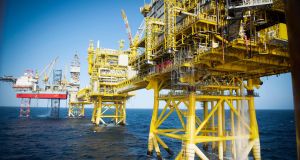 The rally in commodities began to lose steam on Friday. Brent crude, the international benchmark, fell 1 per cent to just above $60 (€49.39) a barrel.

European equities fell modestly on Friday, leaving them on track to end the week only slightly higher.

The region-wide Stoxx 600 index fell 0.2 per cent in early morning trading, putting it on course for a 0.2 per cent weekly gain. London’s FTSE 100 benchmark, meanwhile, was 0.1 per cent down since open, while Germany’s Xetra Dax shed 0.7 per cent.

With some markets in Asia shut for the lunar new year holiday, these losses were enough to push global benchmarks fractionally lower.

The FTSE All-World index slipped 0.1 per cent, but was still up 5 per cent for the month so far, driven by hopes of further economic stimulus in the US and better news on global infection rates and vaccine programmes.

“Global equities have had a good start to the year,” said Gregory Perdon, co-chief investment officer at private bank Arbuthnot Latham. “It’s not uncommon for investors to take a pause to reflect on the data and news flow - which is probably what is happening this morning.”

Investors were also digesting the prospect of a national unity government in Italy led by Mario Draghi, the former president of the European Central Bank. On Thursday, Draghi secured the backing of the Eurosceptic Five Star Movement and is now poised to form a government with an overwhelming parliamentary majority.

“The Draghi news is quite good for the markets,” said Perdon, highlighting the benefits of the politician’s ECB ties. “He is part of the Davos crowd, but he has a very good track record of delivering what he says.”

The rally in commodities began to lose steam on Friday. Brent crude, the international benchmark, fell 1 per cent to just above $60 (€49.39) a barrel.

Thursday’s performance, when the S&P finished slightly higher, was supported by the “continued pledges from the Fed to keep monetary policy loose during the recovery”, said Jim Reid, research strategist at Deutsche Bank.

The “building momentum behind the Biden stimulus plan” was also supporting sentiment, he added. – Copyright The Financial Times Limited 2021