Banks out of sorts at home and in Europe, while payments firms gain in US markets 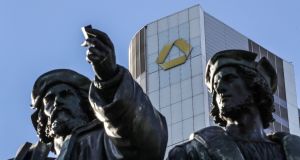 Germany’s Commerzbank tumbled 6 per cent after the lender said its loss deepened in the fourth quarter. Photograph: AFP via Getty

Irish shares dipped on Thursday as Iseq heavyweights Kerry Group and CRH moved in opposite directions.

In contrast, European shares rose as investors kept close watch on a barrage of earnings reports from companies and on progress in stimulus measures in the US for clues on the pace of business recovery.

Kerry Group dropped 4.7 per cent to €108 – even after rallying from intraday lows – as a firm claimed it was “short-selling” the stock and issued a report online that questioned the company’s acquisitions track record. Kerry said the report was “full of errors, inaccuracies and incorrect deductions”.

CRH managed to edge 1.3 per cent higher to €36.45, as building materials sector followers kept a close watch on signs of progress around the proposed $1.9 trillion (€1.6 trillion) US stimulus bill, with data showing a stalling recovery in the country’s labour market strengthening the case for it.

Banks were out of sorts, with AIB down 3.8 per cent and Bank of Ireland off 3.4 per cent.

Tullow added 2.6 per cent to close at 35.1 cent, as investors continue to cheer news that emerged in late trading on Wednesday that the company had agreed to sell more assets, which should help lower its net debt pile.

Coca-Cola HBC jumped 4.6 per cent to the top of the blue-chip index after raising its dividend and saying it expects 2021 revenue to bounce back strongly as at-home demand cushions a hit to consumption in hotels and restaurants.

European information business provider Relx was also among the biggest gainers on the index, up 2.9 per cent after it said it planned to raise its dividend by 3 per cent.

Weighing on sentiment was a sharp drop in oil heavyweights, with BP and Royal Dutch Shell falling 0.5 per cent and 2.2 per cent respectively as oil prices slumped on renewed demand concerns.

Retailer Ted Baker plunged 9 per cent after reporting a 47 per cent fall in fourth-quarter revenue, as stores in Britain and Ireland were shut during the latest lockdown and due to weak demand during the Christmas season.

The banks sector dropped 0.5 per cent as Germany’s Commerzbank tumbled 6 per cent after the lender said its loss deepened in the fourth quarter.

A 13 per cent plunge in Unibail-Rodamco-Westfield saw it languish at the bottom of the Stoxx 600, after the shopping centres owner said it planned to cut US exposure to close to zero.

The S&P 500 and the Nasdaq were ahead in early afternoon trading, with investors betting on more fiscal stimulus to ride out a coronavirus-driven recession as data showed a stalling recovery in the labour market.

Mastercard rose after the credit card giant said it was planning to offer support for some cryptocurrencies on its network this year, joining a string of big-ticket firms that have pledged similar support.

Other payments companies, including PayPal and Visa, also advanced.

Pinterest rose after a report said Microsoft approached the image-sharing company in recent months about a potential buyout. The negotiations were, however, currently not active, according to the report.