Reddit mob’s GameStop victory over hedge funds will be fleeting 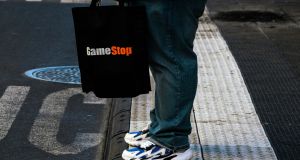 GameStop shares doubled in pre-market trading on Friday after a wild ride of a week. Photograph: The New York Times 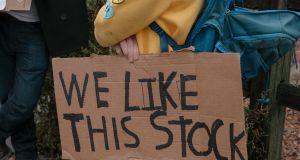 A protester holds a sign outside Robinhood’s headquarters in California on Thursday after the stock-trading app said it would limit trades in GameStop. Photograph: The New York Times

It’s being billed as Occupy Wall Street 2.0. But instead of the demonstrators who camped outside the likes of the New York Stock Exchange in a global movement almost a decade ago against corporate greed and wealth inequality, the campaigners are waging war from their bedrooms. And this time, they’re inflicting some pain.

Wall Street luminaries have looked on with a mixture of intrigue and disdain at the deluge of amateur millennial-type stock-market punters who signed up to the likes of Robinhood and TD Ameritrade commission-free trading apps during Covid-19 lockdowns.

Enticed by the strong stocks rally following a sell-off last March, and investment tips on the discussion website Reddit’s r/WallStreetBets chatroom, the new breed of day trader has become a stock market force.

These investors have fanned share surges from Elon Musk’s Tesla electric car company Tesla to a plethora of so-called “blank cheque” companies that raised money and floated in the past year on the back of the reputations of their promoters and a plan to acquire an actual business in the future.

In recent weeks, however, the r/WallStreetBets army has turned its attention to some unloved stocks where large hedge funds had placed bets on falls in value. Out-of-sorts video game and consoles retailer, GameStop, has been turned into their cause celebre.

The 37-year-old bricks-and-mortar US retailer had long been struggling against a shift to gaming online, with its sales falling by a third to $6.45 billion (€5.3 billion) in the decade to 2019 and the company failing to eke out a profit since 2017. Then Covid-19 struck, sending revenues down 31 per cent over the first nine months of 2020, and making it an obvious target for “short sellers”.

The strategy of short selling involves a trader – typically in a hedge fund – borrowing shares from long-term shareholders in a company and then selling them. The hope is that the shares fall in value before the trader moves back into the market to buy them and return them to the original shareholder. The trader pockets most of the price difference.

However, if the trade goes against the hedge fund and the stock soars, the fund is forced to buy stock to limit its losses.

The last few weeks has seen a throng of r/WallStreetBets bros egg each other on to pile into the GameStop stock and take on short-sellers. This created what is known as a “short squeeze”, forcing hedge funds such as Melvin Capital and Citron Capital, who had bet against the stock, to buy shares and close out their short positions.

With buyers far outnumbering sellers, GameStop shares soared as much as 2,300 per cent in the past two weeks from under $20 to a high of $483, valuing the company at a highly-implausible $34 billion (€28 billion).

The whole thing has played out in a David-and-Goliath stock market battle on social media and in financial pages in recent days, with Melvin, battered by large losses on its GameStop bet, being forced to secure an emergency $2.75 billion investment from rivals Citadel and Point72 to shore up its finances.

Emboldened, the day-traders stampeded into a bevy of other former stock market beauties that had long fallen out of favour to become playthings for short sellers. These included Blackberry, Nokia, US domestic merchandise retailer Bed Bath & Beyond, and cinema chain AMC Entertainment.

Viscerally, it’s hard to feel sorry for hedge fund billionaires taking a beating. Especially when you see someone like industry titan Leon Cooperman, estimated to be worth $3.2 billion, turn up on business news channel CNBC this week to spew his contempt for the great unwashed that have ventured on to his patch.

The 77-year-old founder of Omega Advisers said the market is being fuelled by people “sitting at home getting their cheques from the government” during the pandemic and taking punts.

But short selling can have an important role in a healthy market. It provides an alternative view of a company and its prospects and helps establish a fair price for a stock.

Look no further than the overseas short sellers that started to bet heavily against Irish banking stocks in early 2007, after correctly working out that the State was in the middle of a property bubble that would end in tears.

It’s hard to forget that top executives at Anglo Irish Bank, which would prove in time to be hopelessly insolvent, were among the loudest voices calling out hedge funds as the market bogeymen in September 2008, when the regulator decided to restrict short selling of financial stocks.

With the rise of passive investing over the past two decades resulting in fund managers increasingly following stock market indices rather than picking individual stocks, the fundamental research work that some hedge funds do is arguably more important.

Meanwhile, the smarter r/WallStreetBets types will have got in and out before GameStop and other hyped names pulled back sharply on Thursday, as Robinhood and some other trading platforms placed trading limits on these stocks.

GameStop rebounded by more than 70 per cent in early trading on Friday as the restrictions were eased. But the ones making real money amid this type of volatility are high-frequency algorithmic traders with powerful computers.

So-called pyjama traders hunting for hedge fund scalps have grabbed the attention of the investment world, and beyond, this week, driving GameStop’s shares to somewhere that’s truly unfettered from reality.

But it’s only a matter of time before the music stops.