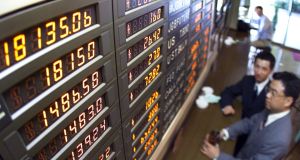 Wall Street’s main indices rose on Thursday as investors looked to corporate earnings and signs of progress on a pandemic-relief package after data suggested the US labour market was stabilising.

European shares extended their rally to a fourth straight day on Thursday, as investors hoped for a swifter global economic recovery, while Unilever’s disappointing targets weighed on London’s blue-chip index.

Banks and sterling rose as money markets pushed bets on negative UK interest rates out to February 2022 after Bank of England said Britain’s banks would need at least six months to prepare for sub-zero rates.

“The BoE look unlikely to cut rates anytime soon, with a six-month adjustment period meaning the UK economy will be well into its recovery by the time they are even considered,” said Joshua Mahony, senior market analyst at IG.

Italian shares gained 1.7 per cent to close at a one-month high, extending a rally after former European Central Bank chief Mario Draghi accepted the task of forming a new government on Wednesday.

Dublin’s Iseq ended the session broadly flat in an uneventful day’s trading. Cairn Homes (+2 per cent) and Glenveagh (+0.46 per cent) both traded up as new figures showed home completions topped 20,000 last year despite the disruption from Covid.

The figure, while down on 2019, has been expected to be much lower but the industry and housing output bounced back strongly in the final quarter. Insulation specialist Kingspan, which has significant business interests in the United States, was the main springer in the market, rising 4.6 per cent to €58.55 as optimism grew that newly installed US president Joe Biden would get his $1.9 trillion Covid-19 relief package across the line.

A 5.3 per cent jump in shares of Bayer lifted Germany’s Dax to one-month highs after the life-science company struck a $2 billion deal to resolve future legal claims that its widely used weedkiller Roundup causes cancer.

Meanwhile, Germany’s ruling coalition parties on Wednesday agreed a batch of additional measures to support those hit hard financially by the Covid-19 pandemic.

Global markets remained hopeful after Democrats pushed ahead on Wednesday with a manoeuvre to pass President Biden’s $1.9 trillion Covid-19 relief package without Republican support. Among other companies reporting earnings, Swiss drugmaker Roche was the top boost on the Stoxx 600 after it forecasted a rise in 2021 sales and profit thanks to surging demand for Covid-19 tests.

The FTSE 100 ended lower on Thursday, dragged down by Unilever and Royal Dutch Shell over disappointing sales goals and a slump in profit, while the Bank of England cut its growth forecast for this year.

Unilever lost 6.2 per cent and was the biggest drag on the index, after its sales growth target underwhelmed investors seeking more ambitious goals amid strong consumer demand for plant-based food products and home care brands. Oil major Royal Dutch Shell was down 2 per cent, after its profit last year dropped to its lowest in at least two decades as the coronavirus pandemic hit energy demand worldwide.

The blue-chip FTSE 100 index edged 0.1 per cent lower, while the mid-cap index added 0.3 per cent. The Bank of England kept its benchmark interest rate on hold at 0.1 per cent and said Britain’s economy would probably shrink by 4 per cent in the first three months of 2021, but was expected to recover rapidly towards pre-Covid levels over the year.

“With pent-up savings set to be unleashed later this year by consumers looking to make up for lost time, the likelihood of negative rates being implemented in the UK this year is reducing,” said Hugh Gimber, global market strategist at JP Morgan Asset Management.

Wall Street’s main indexes rose on Thursday as investors looked to corporate earnings and signs of progress on a pandemic-relief package after data suggested the labour market was stabilising.

The Labor Department’s report showed 779,000 Americans filed new applications for unemployment benefits last week, lower than 812,000 in the prior week, as authorities started to loosen pandemic-related restrictions on businesses.