Dublin closes slightly up as Ryanair and Glanbia gain 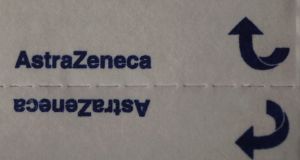 Overall, the European market ended flat on a busier-than-normal day of trading. A long-awaited earnings revival has boosted European equities in 2017, even though a recent rally in the euro is stoking concern that it could derail the recovery.

The Iseq closed up 0.5 per cent. Ryanair rose 0.4 per cent to €18.38, consolidating gains made during Wednesday’s session, while building materials group CRH finished down 0.2 per cent at €30.50. The cement-maker said its group transformation director, Maeve Carton, would retire at the end of August.

Paper and packaging group Smurfit Kappa closed up 1.3 per cent at €26.30 and Independent News & Media rose back above the 11 cent mark.

The FTSE 100 closed down 0.1 per cent, as AstraZeneca’s plunge weighed on the market. The British drugmaker sank 15.7 per cent after a setback for its cancer therapy in one of the industry’s most-anticipated drug studies.

The stock fell to its lowest level in almost five months after a closely watched advanced lung cancer trial failed, in what Morgan Stanley said was a “major setback” for the group.

Anglo American added 3.2 per cent after saying it will pay its first dividend since 2015 earlier than expected.

Mixed fortunes for companies reporting earnings left the Stoxx Europe 600 Index down just 0.1 per cent at the close. Food-and-drinks shares were the best performers in the Stoxx 600, with AB InBev reporting quarterly earnings growth that beat analysts’ estimates.

Germany’s DAX dropped 0.8 per cent as results from Deutsche Bank, BASF and Bayer underwhelmed. Deutsche Bank dropped 6.5 per cent after warning that revenues of its operating businesses will decline this year. The lender on Thursday reported a 10 per cent decline in second-quarter revenue, the weakest quarter in 3½ years.

The disappointing figures from BASF and Bayer made the chemicals sector the worst-performing across Europe.

Nestlé’s results were also weaker than expected. Its shares fell 0.9 per cent after the world’s largest food group trimmed its 2017 sales outlook, adding fuel to shareholder demands on chief executive Mark Schneider to speed up a turnaround.

Swiss drugmaker Roche, meanwhile, gained 1.2 per cent after it raised its 2017 outlook.

Schneider Electric rose 3.8 per cent after raising its full-year target for sales growth and agreeing to buy US power-systems maker Asco Power Technologies for $1.25 billion.

Results from Facebook and Verizon helped boost stocks on Wall Street in early trading, although gains were erased as the session wore on.

Shares in Facebook were up 4.6 per cent in US midday trading, while Verizon was up 6.7 per cent.

Twitter was down 12 per cent in early trading after the company’s quarterly results showed it failed to add users on a monthly basis in the second quarter, compared with the first quarter. United Parcel Service fell 2.7 per cent, despite the US package service posting a better-than-expected quarterly profit.

Amazon, Intel, Starbucks and Mattel are among those reporting results after the close of trading. With equity markets at record levels, investors have been counting on robust company earnings to justify relatively expensive stock valuations.

The dollar rebounded after a sell-off on Wednesday.