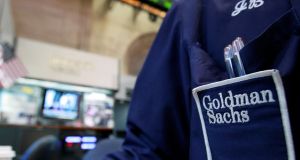 A trader works at the Goldman Sachs stall on the floor of the New York Stock Exchange. Photograph: Reuters

It was a slow day in the Irish market on Tuesday as investors geared up for super Thursday next week, a day when over 200 companies are due to report earnings across Europe.

American banks caused their European peers to drop as weak quarterly earnings reports in both Goldman Sachs and Bank of America Merill Lynch weighed on indices.

Ultimately, most European markets ended down with the Pan-European Stoxx 600 index closing down by 1.06 per cent and Ireland’s benchmark index outperforming slightly and ending lower by 0.7 per cent.

The biggest loser on Ireland’s benchmark Iseq overall index on Tuesday was Bank of Ireland. The recently consolidated stock suffered the most of Irish banks on the back of negative earnings from both Goldman Sachs and Bank of America Merill Lynch. It closed down by 2.89 per cent at €7. AIB, meanwhile, fell by just over 0.59 per cent to close the day at €5 while Permanent TSB dropped by 2.3 per cent.

It was a day of light volumes on the Irish market but Ryanair managed to push upwards on the day despite disappointing earnings from German Airline Lufthansa which fell from its 10-year highs.

Ireland’s biggest company CRH, too, had a bad day, dropping by 1.69 per cent on the back of a poor performance by its peers.

Dalata Hotel Group, which announced Tuesday that it had submitted a planning application for the redevelopment of its Tara Towers Hotel in Dublin 4 edged higher by 1.04 per cent on the day.

Property developer British Land jumped 3.1 per cent and was among the top performers on Europe’s Stoxx 600 after announcing a £300 million share buyback.

Election-related letters and growth from its continental European parcel business helped Britain’s Royal Mail to eke out a 1 per cent gain in first-quarter revenue, the resilience boosting its shares.

Defence contractor G4S rose to the top of the FTSE 100 as investors read across from Carillion’s gains.

Barclays and Deutsche Bank, which are also major players in the bond market, were top fallers on their respective indexes after the Goldman results.

Elsewhere, Ericsson fell by nearly 16 per cent after cutting its forecast for the mobile infrastructure market and reporting a wider than expected loss, a further blow to a company that is undertaking cost cuts.

Nokia fell 3.3 per cent to the bottom of the CAC 40 as the Finnish mobile equipment maker’s stock suffered too.

The S&P and the Dow were lower on Tuesday, weighed by tepid earnings from big banks and a setback to President Donald Trump’s pro-growth legislative agenda after Republican effort to overhaul healthcare collapsed.

Losses on the Nasdaq were limited by a jump in Netflix to a record high, following the video streaming company’s robust subscriber growth.

Shares of Bank of America slipped, weighing on the S&P, while Goldman Sachs’ fall dragged the Dow.

Last week, shares of JPMorgan, Wells Fargo and Citigroup had taken a beating after their quarterly results and forecasts failed to excite investors.