Markets explode into life on prospect of Brexit deal 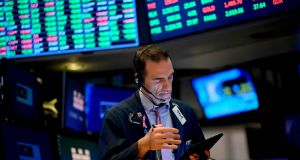 Apple provided the biggest boost to the S&P 500 and Nasdaq. Photograph: AFP

European shares were on the tear on Friday as a surprise breakthrough in Brexit talks drove UK-focused British companies and the Dublin’s Iseq index almost 4 per cent higher. German shares logged their best day in nine months.

Sterling jumped nearly 2 per cent versus the dollar for a second day, putting it on track for its largest weekly gain in more than two years after Brexit negotiators reported a “constructive” meeting.

Wall Street rose for the third straight session, with hopes running high that the talks between US president Donald Trump and Chinese vice-premier Liu He would culminate in a partial trade deal and delay US tariff increases.

The Iseq, often considered a barometer of Brexit sentiment, jumped 3.7 per cent to its highest since May. Banks and property companies were among the big movers.

Glenveagh Properties was also among the best performers, up almost 11 per cent to 82 cents.

Dalata hotel group benefited strongly, as the tourism sector is on the line to gain most from the potential removal of a no-deal threat. It closed up 6.5 per cent to €5.19. Ryanair was more than 5 per cent to €12.01.

Investors pounced on everything from banks such as RBS to housebuilders and retailers such as Kingfisher, which owns DIY chain B&Q, after Boris Johnson and Leo Varadkar said they had found “a pathway” to a possible Brexit deal.

The FTSE 250 surged 4.2 per cent. The FTSE 100 blue-chips, however, added a modest 0.8 per cent in comparison as a rally in sterling hit the dollar-earning constituents of the index.

Four of the so-called UK “big banks”, namely RBS, Lloyds, HSBC and Barclays, together added roughly £12 billion to their combined market cap with rises of between 2 per cent and 12.3 per cent. Housebuilders Persimmon, Barratt, Berkeley and Taylor Wimpey, whose businesses are heavily reliant on the health of the UK economy, jumped between 8.8-12 per cent.

A notable blemish on the main index was a 4 per cent drop in ad firm WPP after French rival Publicis cut its sales view for the second time.

Luxury brand Burberry, which advanced in the previous session on a positive read-across from LVMH, slipped 2.1 per cent after German rival Hugo Boss cut its annual forecast.

French index, the Cac, rose 1.73 per cent. The German index, packed with automakers exposed to UK demand, jumped 2.9 per cent.

SAP, Europe’s most valuable tech company, also contributed to gains in Frankfurt, rising 10 per cent for its best day since April after releasing strong third-quarter results and saying its long-term chief executive had stepped down.

Publicis tumbled 14.5 per cent to a seven-year low after the ad firm lowered its full-year sales target for the second time in 2019.

Shares of Apple hit a record high and were the biggest boost to the S&P 500 and Nasdaq, while the technology sector was set for its best day in five weeks.

The industrial sector gained 2.2 per cent, boosted by a 17.2 per cent surge in shares of Fastenal after the industrial distributor beat quarterly profit expectations. Defensive utilities was the only sector trading in the red, while consumer staples and real-estate stocks posted the smallest gains, suggesting an uptick in risk appetite.

Bets for another interest rate cut by the Federal Reserve fell amid data showing a rise in consumer sentiment for the month of October. Chipmakers with a sizeable exposure to China rose in early trading, with the Philadelphia Semiconductor index gaining 2.5 per cent. – Additional reporting: Reuters/PA