Irish banks give up some gains of recent days as AIB down 3.6% and BofI slides almost 1% 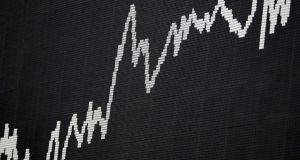 A surge in sterling and the rally in Britain’s domestically exposed stocks also fizzled. Photograph: Bloomberg

European shares edged lower on Thursday, as strong earnings from Sweden’s Ericsson were offset by fading optimism over the Brexit deal amid investor worries about its support in the British parliament.

A surge in sterling and the rally in Britain’s domestically exposed stocks also fizzled as investors braced for a weekend parliamentary showdown over the deal.

Wall Street rose, with the S&P 500 and Nasdaq indexes near one-month highs on upbeat earnings from Netflix and Morgan Stanley.

The Iseq index fell by almost 1 per cent, as investors’ nerves jangled in anticipation of of the Brexit deal being debated in Westminster this weekend.

Irish banks gave up some of their gains of recent days, when they had rallied on the emergence of a deal. AIB finished the session down more than 3.6 per cent to close at €3.14, while Bank of Ireland was down almost 1 per cent at €4.44.

UK-focused Flutter Entertainment, the owner of Paddy Power, also finished in the red, down 1 per cent to €86.60.

Other companies with a clear stake in a Brexit deal, such as Dalata Hotel Group, held their ground. The hotels operator finished up 1.1 per cent to €5.42.

Dublin-headquartered Grafton Group fell more than 10 per cent after a profit warning.

Shares in WH Smith jumped higher after it continued its march into the US by snapping up North American retailer Marshall Retail for $400 million. The news came as the retailer revealed that sales jumped 11 per cent across the business to £1.4 billion. Shares in the historic retailer increased by 122p to 2,210p.

Ben & Jerry’s manufacturer Unilever was another riser despite missing City forecasts after a slowdown in key international markets and weaker growth in ice cream. The Marmite maker reported weaker-than-expected sales in the past three months due to softer demand in China and India. Shares rose by 44p to 4,652.5p.

Domino’s Pizza saw shares close higher after it said it is planning to withdraw from foreign markets as they continue to decline. Outgoing chief executive David Wild said that a review had concluded Domino’s would be better off selling the business, which stretches across Iceland, Norway, Sweden and Switzerland. Shares in Domino’s moved 11.2p higher to 277p at the close of trading.

The German Dax fell by 0.12 per cent while the French Cac moved 0.42 per cent lower.

Swedish telecoms gear maker Ericsson was a bright spot, jumping 6 per cent to hit a three-month high after posting quarterly core earnings that were well ahead of expectations. Shares of Finnish peer Nokia gained 2 per cent.

Nestle was the biggest drag on the benchmark index as organic sales growth dipped in the third quarter, outweighing the announcement of a plan to buy back up to 20 billion Swiss francs in shares.

Netflix shares rose 4.4 per cent, after the video-streaming service provider added slightly more paying subscribers than Wall Street’s expectations in the third quarter. The stock helped the communication services sector gain 0.7 per cent. Morgan Stanley climbed 3 per cent after the bank beat analysts’ expectations for quarterly profit, wrapping up strong earnings from major US lenders including JPMorgan Chase, Citigroup and Bank of America.