Sterling choppy as traders brace themselves for dramatic swings

Expectations of volatility at highest level since Brexit referendum 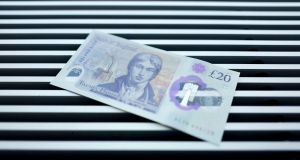 The moves in sterling came as investors position for turbulence in the run-up to the October 31st deadline. Photograph: Getty

Sterling rose in choppy trading on Wednesday as expectations for tumult in the currency markets swelled with talks between UK and EU negotiators set to resume in a final push for a Brexit deal.

Negotiators in Brussels were racing to settle the terms of a revised Brexit deal on Wednesday, as Boris Johnson battled to win support from the DUP and hardline Eurosceptic Conservative MPs.

Sterling rose 0.4 per cent to above $1.28, having earlier in the session traded below $1.27, as traders refined their expectations for a deal following a burst of optimism that has swept markets since the end of last week. Sterling has risen 5 per cent since Thursday morning.

The currency’s moves come as investors position for turbulence in the run-up to the October 31st deadline.

Expectations for sterling volatility over the next week have risen to their highest level since the aftermath of the Brexit vote in 2016, as traders moved into contracts in the options market that pay out if the currency fluctuates.

Investors’ expectations for swings over the next three months have also risen sharply, and are now at their highest level of the year.

Sterling had risen sharply on Tuesday amid reports a deal was imminent, although there have still been no concrete signs of an agreement.

Donald Tusk, EU Council president, said ‘everything should be clear’ on Brexit by late Wednesday evening.

“Clearly there are still key issues to be ironed out but that being said it would appear a deal is in the crosshairs,” said Deutsche Bank strategist Craig Nicol.

The pound is now trading around five-month highs and has returned to levels last seen before Boris Johnson emerged as the frontrunner to be the next prime minister along with threats of a no-deal exit.

“Most of the no-deal risk (a combination of no deal now and postponement with an uncertain outcome) should now have been priced out,” Commerzbank strategists said in a note on Wednesday morning.

Even if the UK and EU are able to agree a deal it would then require ratification by the UK parliament, possibly in an unusual Saturday sitting this weekend.– Copyright The Financial Times Limited 2019