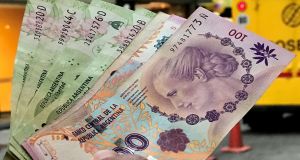 Companies in Argentina will need permission from the central bank to access the foreign exchange market to purchase foreign currency.Photograph: Marcos Brindicci/Reuters

Argentina’s government authorised currency controls on Sunday in an about-face by President Mauricio Macri, who had previously lifted many protectionist practices of his predecessor, Cristina Fernandez de Kirchner.

The central bank is now authorised to restrict purchases of dollars as it burns through its reserves in an effort to prop up the peso currency, the government said in a decree published in its official bulletin.

The measure means companies will need permission from the central bank to access the foreign exchange market to purchase foreign currency and make transfers abroad.

The government of Latin America’s third largest economy said in the decree that “the executive branch needed to adopt a series of extraordinary measures aimed at ensuring the normal functioning of the economy.”

Hours after the decree was published, a spokesman for the International Monetary Fund, with which Argentina has a $57-billion standby agreement, said its staff were analyzing Argentina’s “capital flow management measures with the aim of protecting exchange rate stability and the savers.”

“Staff will remain in close contact with the authorities in the period ahead and the Fund will continue to stand with Argentina during these challenging times,” the spokesman said.

After opposition candidate Alberto Fernandez and Fernandez de Kirchner, who is now his vice presidential candidate, pulled off a stunning upset in the Aug. 11 primary vote, bonds, stocks and the peso currency plummeted on market fears over a potential return to the interventionist policies of Fernandez de Kirchner’s previous government.

Macri’s government and the central bank are trying to stabilize the economy as the Oct. 27 presidential election looms, for which Fernandez is now the front-runner.

The central bank has burned through nearly $1 billion in reserves since Wednesday in an effort to prop up the peso. But the intervention did not have the desired impact and risk spreads blew out to levels not seen since 2005, while the local peso currency extended its year-to-date swoon to 36%.

The central bank said in a statement that the measure did not limit people from withdrawing dollars from their accounts. It does, however, restrict people from buying more than $10,000 a month, or making transfers exceeding that amount per month.

It also requires exporters to liquidate their foreign exchange earnings in the local market under deadlines. Companies will not be permitted to stockpile dollars, the bank said.

“(Foreign) trade is not restricted. There were restrictions before, but there are none now,” said a source familiar with the new central bank measure.

“All of this is to preserve the economy as well as possible in this circumstance,” said the source, who requested anonymity because he was not authorized to speak to the media.

Treasury Minister Hernan Lacunza called the measures “uncomfortable” in an interview with a local TV station on Sunday evening, but said they were necessary for avoiding a worse situation.

“They are not measures for a normal country,” the minister said.

“If we do not do it, the consequences would be serious.”

In another TV interview, Lacunza said an exchange rate of 61 pesos per U.S. dollar would be “excessive”.

The central bank announced on Friday that banks would need to seek prior authorization before distributing their earnings, in order to “avoid any lack of money” and safeguard the liquidity of Argentina’s financial system.

Last week, Lacunza said the government would negotiate with holders of its sovereign bonds and the IMF to extend the maturities of its debt obligations as a way of ensuring Argentina’s ability to pay.

A team from the IMF was in Argentina last week to meet with government and central bank officials, as well as Fernandez and his economic advisers.

The Fund’s next scheduled review of Argentina’s lending program is on Sept. 15.

Worries over Argentina’s ability to meet its dollar-denominated debt obligations have increased since the Aug. 11 primary.

“As Macri’s government runs out of options, it will most likely have to resort to very unpalatable measures that most adult Argentines hoped they would never experience again,” said Emilio Ocampo, an independent economist and consultant.

“We are in a gray area, and from Friday until today, it got darker. It may get even darker if confidence is not restored.”

Fernandez de Kirchner, in office from 2007 to 2015, clamped down on access to US dollars in a bid to protect the central bank’s precarious reserves. – Reuters