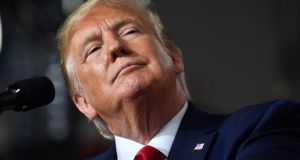 Donald Trump told US companies “to immediately start looking for an alternative to China” in response to Beijing’s threat to impose retaliatory tariffs on US goods. Photograph: Getty

Markets fell as China and US threatened tit-for-tat tariffs on each others’ imports as latest round of the trade war between the pair escalated.

House builder Glenveagh tumbled more than 4 per cent after chief executive, Justin Bickle, announced his resignation and the group reported that it lost €3.8 million before tax in the first six months of the year.

Glenveagh’s shares closed 4.33 per cent down at 61.9 cent, hitting a 12-month low of 58.9 cent during trade before recovering some ground. Stephen Garvey, the builder’s chief operating officer, will succeed Mr Bickle.

Dealers said that Glenveagh shares’ poor performance had a knock-on impact on rival Cairn Homes, which shed 3.33 per cent to close at 95.7 cent on the Dublin market.

Shares in insulation maker Kingspan closed 3.23 per cent down at €42 despite the multinational manufacturer reporting that trading profit hit a record €230 million in the first six months of the year.

Building materials giant and index heavyweight, CRH, which earlier this week published strong interim results, advanced 1.74 per cent to €29.22, making it one of the market’s best performers on Friday.

Hotel group Dalata ticked up 0.8 per cent to €4.43, but dealers noted that its shares have been under pressure for some weeks.

Ryanair, which has been dealing with strike threats in several locations this week, rallied to a high of €8.866 during trade, but lost some of that altitude to close 0.42 per cent up at €8.574.

Entertainment One soared after it was revealed that US toy company Hasbro has agreed a deal to buy the Peppa Pig owner for £3.3 billion. Its shares jumped 141.6p or almost 32 per cent to 585p on Friday.

Elsewhere, transport group Eddie Stobart put on its brakes and suspended the trading of its shares on the back of an accounting review which is expected to affect its earnings for the first half of the year.

The company’s chief executive Alex Laffey also announced his immediate departure from the firm and will be replaced by Sebastien Desreumaux, currently chief executive of its iForce business and head of contract logistics.

The pan-European Stoxx 600 ended 0.7 per cent lower after a volatile session while Germany’s trade-sensitive Dax fell 1.2 per cent.

Among individual stocks, Kloeckner & Co shares jumped 7 per cent after a newspaper said Thyssenkrupp was in talks to buy the metals distributor.

Wall Street’s three main indices lost more than 1 per cent on Friday after US president Donald Trump ordered US companies “to immediately start looking for an alternative to China” in response to Beijing’s threat to impose retaliatory tariffs on US goods.

Seven of the 11 major S&P sectors posted losses of more than 1 per cent, with a 2 per cent decline in the energy sector leading the decliners. The tariff-sensitive Philadelphia chip index slid 1.50 per cent. Declining issues outnumbered advancers for a 3.00-to-1 ratio on the NYSE and for a 2.98-to-1 ratio on the Nasdaq. – Additional reporting: Reuters, PA