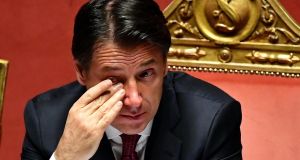 European shares fell on Tuesday after two sessions of robust gains as optimism over hopes of stimulus in major economies waned, and investors awaited more guidance from central banks.

The Iseq index followed other European bourses lower, closing down 2 per cent.

Ryanair, which on Wednesday finds out if it is entitled to an injunction preventing Irish-based pilots from striking this week, was down 3 per cent.

Flutter was down 1.6 per cent after Davy reduced its earnings forecast for the company.

Dalata was one of the biggest fallers in Dublin, losing 3.3 per cent. Cairn closed down nearly 2 per cent down, while Glenveagh edged up 0.6 per cent.

London’s main index ended firmly in the red on Tuesday after new US-China trade jitters and political instability in Italy took down heavyweight firms across sectors. Exporter stocks dipped as the pound gained after German chancellor Angela Merkel’s comments on the Brexit process.

The FTSE 100 gave up earlier gains and shed 0.9 per cent, though investors still hoped for fresh stimulus from central banks and governments to beat back the risk of recession. The FTSE 250 lost 0.5 per cent.

Asia-focused banks such as HSBC dragged the blue-chip index lower after the US affirmed its tough stance on Chinese telecoms giant Huawei, which investors saw as a risk of further escalating tensions. Oil majors Shell and BP also slipped.

In news-driven moves, mining heavyweight BHP shed 1.7 per cent as a warning that global economic headwinds could hit demand for iron ore and copper took the shine off its largest annual profit in five years.

The pan-European STOXX 600 index which rose in the early hours of trading reversed course in the afternoon to end 0.7 per cent lower. Madrid shares led the declines, while Milan’s blue-chip index ended 1.1 per cent lower.

All sub-sectors ended in the negative, with interest-rate sensitive banks weighing the most on the benchmark index. Euro zone bond yields also fell back towards record lows.

The basic resources sector fell over 1 per cent after BHP said that headwinds to global growth could hit demand for its main commodities, iron ore and copper.

In a bright spot Pandora, a Danish jewellery-maker, jumped over 10 per cent to the top of the STOXX 600 index. Despite a drop in second-quarter earnings, Pandora maintained its full-year forecast.

Wall Street’s main indexes edged lower after three sessions of gains as lower Treasury yields weighed on financial stocks. Losses on the blue-chip Dow and the S&P 500 indexes were tempered by a 4.4 per cent rise in Home Depot.

Shares of Netflix were the biggest drag on the S&P 500, losing 3 per cent after Walt Disney announced its streaming service would launch in Canada and the Netherlands in November.

Eight of the 11 major S&P sectors were trading lower. The energy sector lost 0.59 per cent, weighed by lower oil prices.

Medtronic gained 4.5 per cent, and was among the biggest gainers on the S&P 500 after the medical device-maker raised its full-year adjusted profit forecast.