Traders encouraged by comments despite lack of concrete progress 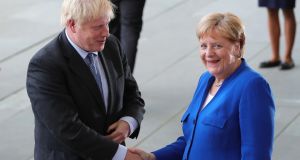 Sterling shot higher on Thursday on hopes that a Brexit deal could still be within reach following UK prime minister Boris Johnson’s meetings in Paris and Berlin.

Sterling rose nearly 1 per cent against the dollar to breach $1.22, and rallied by a similar margin against the common currency to €1.1035.

German chancellor Angela Merkel on Thursday said the UK has until October 31st – the Brexit deadline – to find a solution for the backstop, which is proving an intractable issue between the two parties.

“One must say that one can... achieve it by October 31st,” Ms Merkel said in comments reported by Reuters.

Ms Merkel on Wednesday expressed hope that the UK and the EU could “find a solution in the next 30 days,” but Thursday’s comments were being interpreted as offering the UK more time.

Also on Thursday, Mr Johnson held a news conference with French president Emmanuel Macron in Paris, where the British prime minister repeated his belief that the two sides could reach a deal by the Halloween deadline.

Mr Johnson’s visit to Paris, and Wednesday’s meeting with Ms Merkel in Berlin, have failed to yield concrete progress towards stopping a no-deal Brexit. Instead, traders have been encouraged by the optimistic noises from the two European leaders.

Mr Macron said that the two sides should be able to find “something intelligent in 30 days if there is goodwill on all sides”.

Still, he doused some of Mr Johnson’s optimism, as he reiterated there was little chance of the EU substantially renegotiating the withdrawal agreement.

Sterling is still trading at historically weak levels, and has fallen nearly 7 per cent against the dollar since May as the foreign exchange markets have repriced the likelihood of a no-deal Brexit. – Copyright The Financial Times Limited 2019

1 High Court appoints interim examiner to Compu b parent company
2 Brexit: System agreed for Irish goods to skip checks on UK trade
3 Second Covid-19 outbreak and no-deal Brexit an appalling vista
4 How much do Irish people earn? And what will Covid-19 do to our wages?
5 Why are markets booming when a crash is on the way?
6 David McCullagh announced as co-host of RTÉ Six One News
7 ‘The rental situation stops me moving back home’
8 Ireland faces 'deep downturn' this year and may not rebound until 2024 if there is a second wave
9 Red tape logjam creates fear for Irish timber supply
10 Former Worldspreads chief Conor Foley faces €730,000 fine
Real news has value SUBSCRIBE