Markets report: Trading volumes were thinned out by a UK holiday 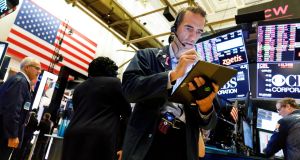 A global gauge of equities rose on Monday and the dollar recovered from earlier losses as US president Donald Trump said Chinese officials had contacted Washington about resuming trade negotiations, after signs of escalation in the U.S.-China trade dispute had roiled markets earlier in the day. Mr Trump’s comments followed Chinese vice premier Liu He’s remarks that China was willing to resolve the trade dispute through “calm” negotiations. European stocks bounced off their lows upon the easing of rhetoric between Washington and Beijing, and US stocks opened higher. “The sentiment today is conciliatory. The president is trying to walk back,” said Art Hogan, chief market strategist at National Securities in New York, referring to Mr Trump. “Whether or not he has a phone call with China doesn’t matter,” Mr Hogan added. “The point is that he is attempting to keep the September meeting scheduled and get back to the negotiating bit.”

The Iseq index ended the session marginally down at 5,743, roughly in line with European indices, amid thin trading volumes. Ryanair was up nearly 1 per cent at €8.64 after a turbulent week last week. The budget airline is battling possible industrial unrest on several fronts as staff agitate for better pay and conditions. Bank of Ireland and AIB ended down 0.9 per cent and 0.3 per cent at €2.24 and €3.44. Shares in Swiss-Irish food group Aryzta stabilised and rose by 1.4 per cent to 73 cents after slumping to an all-time low last week as two heavyweight brokerages highlighted risks to the baked goods specialist’s turnaround. Building materials giant CRH traded flat €29.27. Last week after delivering strong results, it hinted it may consider further share buybacks to follow the €900 million it is returning to investors this year. The property reits Ires, Hibernia, Yew Grove all rose in value between 0.5 per cent and 2.4 per cent.

European shares stabilised on Monday as trade tensions between the United States and China eased somewhat while potential for a coalition arrangement to form a new government in Rome thrust Italian stocks higher. The pan-European Stoxx 600 index ended flat, clawing back ground after a Friday sell-off ignited by yet another tit-for-tat round of tariffs between the world’s two largest economies.

European stocks have swung wildly in August over worries that the US-China trade war will eventually tip the global economy into recession, setting the STOXX 600 on course to end August lower.

Trade-sensitive auto stocks led gains on the benchmark, having fallen 2 per cent in the previous session after China announced fresh tariffs on certain US goods. “We are expecting a trade deal between China and US towards the end of the year, but that further escalation was in our scenario,” said ING economist Timme Spakman. In corporate news, German real estate stocks came under pressure after a report that Berlin’s city government plans to cap rents. Shares in Deutsche Wohnen slid nearly 3 per cent.

Wall Street rebounded on Monday after US president Donald Trump sought to ease trade tensions with China, soothing investor nerves after an intense feud between the world’s top two economies last week sent stocks into a tailspin. The benchmark S&P 500 index logged its worst run of weekly losses on Friday since a selloff in late May after both sides threatened to slap more tariffs on each other’s goods, and Trump told US companies to look for alternatives to doing business with China. In a softening of stance, Mr Trump said on Monday Beijing had contacted Washington overnight to say it wanted to return to the negotiating table, adding that talks between the two countries were “more meaningful” than any time.

Shares in tariff-sensitive companies including Apple jumped 2 per cent, boosting the technology sector, while a 1.9 per cent rise in shares of Boeing lifted the Dow Jones Industrial Average. Chipmakers, which heavily rely on China for their revenue, rose, with the Philadelphia Semiconductor index adding 1.1 per cent. Concerns about the global economy slipping into recession and uncertainty over the pace of US interest rate cuts have made investors nervous about how far the longest cycle of US expansion would survive.

Among other stocks, Celgene rose 3.8 per cent after Amgen said it would buy the company’s psoriasis drug Otezla, clearing the way for Bristol-Myers Squibb to go ahead with its $74 billion deal for Celgene. Shares of Bristol-Myers jumped 4.3 per cent while shares in Amgen rose nearly 3 per cent. Shares of Beyond Meat rose 4.5 per cent after Yum Brands said it will be testing Beyond Meat’s plant-based nuggets at an Atlanta KFC restaurant. Shares of Yum Brands rose 1.3 per cent. - Additional reporting by Reuters and Bloomberg