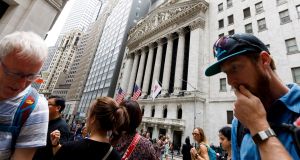 By Tuesday afternoon, equity indexes on Wall Street had given up earlier gains amid uncertainty over the prospects for a US-China trade deal.

European shares rose comfortably on Tuesday, led by Italian stocks on hopes of an arrangement to form a new coalition government in Rome, while Beijing’s pledge to boost car sales triggered gains in auto-makers exposed to Chinese markets.

However, by Tuesday afternoon, equity indexes on Wall Street had given up earlier gains amid uncertainty over the prospects for a US-China trade deal.

UK opposition parties vowed to try and pass a law to prevent a no-deal Brexit at the end of October. Dublin’s Iseq index, typically sensitive to Brexit news, jumped on the development, closing 1.5 per cent higher.

Cairn Homes was among the strongest performers, rising more than 5 per cent to €1.01. It announced the €94 million sale of a Citywest office block and hinted it may sell more in future to institutional investors.

Providence Resources slumped 22 per cent to about 8 cents per share after it announced yet another delay to the receipt of funding from its Chinese partner for the Barryroe oil prospect in the Celtic Sea.

The promises from Britain’s opposition parties to avert a no-deal Brexit led to gains for the domestically-focused midcap index as well as blue-chip holiday companies and airlines, although gains in the local currency weighed on the exporter-heavy FTSE 100.

British housebuilders, typically more vulnerable to any economic hit to the UK, jumped nearly 2 per cent to their highest level in a nearly a month. Travel and related firms including TUI and British Airways/Aer Lingus owner IAG also gained.

Serviced offices provider IWG scaled a lifetime high with a 4 per cent rise and was among the biggest boosts to the midcap index, after Sky News reported over the weekend that the company was planning to list its US arm in New York for £3 billion.

Carpetright surged 11 per cent as its biggest shareholder, Meditor Capital Management, is set to buy the retailer’s £40.7 million (€45 million) line of credit from its lenders.

Milan’s blue-chip index ended 1.5 per cent higher, far outperforming its regional peers, apart from Ireland, as the 5-Star Movement and the opposition Democratic Party (PD) appeared on the verge of a deal to form a new government at the centre.

The pan-European Stoxx 600 index ended 0.6 per cent higher, reversing losses from the morning led by defensive utilities and auto stocks.

In a quiet day for company news, Swedish leisure products supplier Dometic slid 7 per cent to land at the bottom of the Stoxx 600 on the latest downward trend in US leisure vehicle shipments.

Offering markets support was a 0.23 per cent rise in the healthcare sector, powered by gains in Johnson & Johnson. Shares in the drugmaker rose 2.22 per cent after an Oklahoma judge said J&J must pay $572.1 million for its part in fuelling the US opioid epidemic, a sum that was substantially less than what investors had expected.

Philip Morris International shares dropped 3.6 per cent, after the tobacco maker said it is in talks with Altria Group to combine in an all-stock merger of equals. Altria’s shares were off 1.1 per cent.