Brexit hits Kingspan sales but still on track for growth 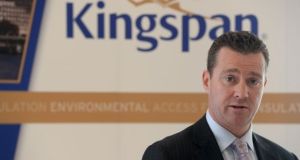 Kingspan continues to expect full-year trading profit to increase 10 per cent to €490 million versus 2018 despite witnessing a decline in sales in the third quarter.

The building material group said sales in the nine months to the end of September were up 8 per cent to €3.43 billion compared to the same period a year earlier, with growth slowing to 2 per cent in the July to September period.

It said revenues in its insulated panel business was up 9 per cent in the first nine months, with underlying sales up 2 per cent versus last year. The company said sales were up 1 per cent in the third quarter alone as it experienced a 15 per cent reduction in order intake in Britain linked to Brexit.

Insulation board sales to the end of September were 3 per cent higher, with revenues falling 2 per cent in the third quarter on the back of an easing of sales in Britain, Ireland and Germany.

“Overall our end markets are fragile, reflecting an uncertain global macro backdrop. In particular we are mindful of the deterioration in sentiment in some markets, most notably in the UK. This is likely to influence sales activity in the first quarter of 2020 at least.”

Net debt at the end of September was €622.5 million, Kingspan added.

The company said it recently completed the acquisition of Group Bacacier, an integrated metal profiling and insulated panel distributor with an extensive network across France, with annual revenues of approximately €190 million. The transaction is expected to contribute trading profits of about €11 million next year.

In a note to investors,Davy said the new deal would extend Kingspan’s presence in what has been an excellent region recently for the group.

Noting the cautious tone of Kingspan’s trading update, Davy said it was likely to pull back its 2020 trading profit forecast to €525 million versus a previous guidance of just under €535 million.

Shares in Kingspan were trading down 1 per cent to €48.12 at midday, having slipped as much as 3 per cent earlier in the day.

1 Should my mam wait for house prices to drop before buying?
2 Cheers: Conor McGregor's whiskey races up the sales chart
3 Two prominent business leaders in planning row with neighbour
4 ‘I’m so lucky to be in the Caribbean – a million miles from Derry Girls’
5 Coronavirus: Big majority ‘uncomfortable’ returning to everyday activities
6 Global stocks climb near three-month highs as rebound hopes grow
7 ‘I have a talent for justifying purchases’
8 Chris Johns: Past is another country when it comes to our post-pandemic future
9 Battle for control of America’s mammoth utility industry set to intensify
10 McCanns’ Balmoral sees property value hit from Covid-19
Real news has value SUBSCRIBE