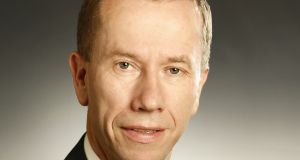 Michael Maher, chief operating officer at Glen Dimplex. He will take up his position on both boards on January 1st when he retires from his executive position with the group

Electrical goods manufacturer Glen Dimplex is appointing retiring chief operating officer Michael Maher to its shareholder supervisory board and to the board of the Naughton Foundation.

Mr Maher, who has been with the family-owned group since 2000, when he joined as group finance director. He was previously a partner at PwC.

He will take up his position on both boards on January 1st when he retires from his executive position with the group.

Supervisory board chairman and company founder Martin Naughton said Mr Maher had been “a central part of our business over the past two decades and the knowledge he has gained will be of enormous value to the oversight of the business and the foundation”.