Coming by 2021: the Ford with no steering wheel or pedals

Car will initially be aimed at driverless taxi services 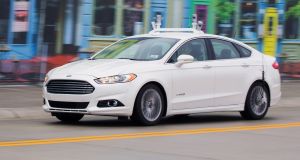 Ford is hoping by 2021 the likes of Uber users could be taking lifts in fully automated driverless vehicles manufactured by Ford.

Ford says it will build a totally self-driving car by 2021 as it seeks to take the lead in the global race to produce the world’s first high-volume driverless vehicle.

The car, which will have no steering wheel or pedals, will be used in the driverless taxi services that Ford said it expects to dominate the market in the coming decade.

The carmaker said in a later investor call that it expected to first roll out the driverless vehicles in big cities. The cars would most-likely be hybrids rather than full electric vehicles or cars with a conventional internal combustion engine, to ensure range and minimise downtime needed for recharging.

The company announced a suite of investments in technology groups, including one alongside Chinese search engine Baidu, and a doubling of its operation in Silicon Valley on Tuesday, to bolster its position in the race to develop the autonomous technology that is expected to revolutionise the motor industry.

“Vehicle autonomy could have as big an impact on society as the Ford mass assembly line had over 100 years ago.”

He said the cars will be “specifically designed for commercial” services such as ride-booking or ride-sharing.

The move pits Ford directly against Google and Apple as well as rival car manufacturers such as BMW, which has formed a joint partnership with Intel and Mobileye to develop a fully driverless vehicle by 2021.

When it announced the deal last month, the German carmaker said it wanted to become the “number one in autonomous driving”.

But Ford has announced a number of investments it hopes will give it the edge over its rivals.

The investment in Velodyne, which makes the laser-based technology that is widely acknowledged to be necessary to offer cars that can drive themselves, was made alongside Baidu.

A number of carmakers have entered deals with technology firms.

Fiat has done a deal to collaborate with Google to develop autonomous minivans, while Toyota has taken a stake in Uber and Volkswagen has invested in Gett, the ride-booking service. General Motors earlier this year invested $500m in Lyft, a car-hailing service.

Michelle Krebs, a director at Auto Trader, said: “General Motors has been grabbing all of the headlines of late, and Ford can’t be happy about that, especially as some Wall Street analysts have wondered if Ford is falling behind.”

Raj Nair, Ford’s chief technical officer, said driverless cars for individual use would come later. “We don’t expect to see fully autonomous vehicles for personal use for several years after they are first introduced”, he told a press conference in Palo Alto on Tuesday.

The industry believes that driverless cars will result in far fewer road deaths globally, as more than 90 per cent of accidents are a result of human error.

But the interim technology, where the car hands back control to the driver in certain situations, has faced questions over its limitations.

In June Tesla, which operates lane-driving technology on its cars, disclosed a fatal accident in Florida when its system failed to detect a white van in bright sunlight.

Elon Musk, founder and chief executive of Tesla, has defended the technology, saying that it is safer than a human if used correctly.

Mr Nair told the FT in an interview that Ford had decided to leap to full autonomy “because we have not found a technology that can ensure driver engagement [when not in control]”.

Mr Fields added: “We wanted to think this through holistically and have a clear path where we are heading.”

Partially-driverless technology, which controls braking and steering while on motorways, is expected to be rolled out in some Nissan cars later this year, the first time the system will be available in mass-market models.

Currently high-end Audis, BMWs, Mercedes and Teslas all contain some form of semi-driverless technology, which uses a combination of visual sensors and radar systems.