Company employs 1,000 people and has place 50% of its workers on ‘paid leave’ 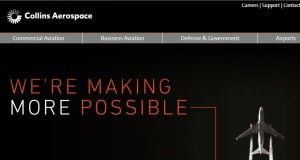 Collins Aerospace, which is part of Connecticut headquartered United Technologies Corporation, is one of the North’s largest manufacturers.

Collins Aerospace, which employs 1,000 people in the North, has suspended all of its operations in Kilkeel and placed 50 per cent of its workers on “paid leave” while the remainder work from home.

The company, whose core business is the manufacture of aircraft seats and seating components, said that its first priority during the coronavirus crisis was “the health and safety” of its employees, contractors and visitors.

“As a result, we have suspended operations at our facility in Kilkeel, Northern Ireland, until further notice,” said a company spokeswoman.

Collins Aerospace, which is part of Connecticut headquartered United Technologies Corporation, is one of the North’s largest manufacturers.

It said it had taken the decision to suspend work in Kilkeel “in compliance with guidance from the UK government”.

The spokeswoman added: “We remain in regular communications with our employees and contractors to inform them of the status of our operations. We have informed our customers and suppliers and we will continue to monitor the situation and provide updates as the situation continues.”

ADS, the UK industry group which represents businesses that operate in the aerospace, defence, security and space sectors, has warned that “many companies will face significant challenges” because of Covid-19.

It believes that the direct impact of coronavirus on aircraft orders and deliveries will start to be seen this month and “year-on-year comparisons will show the impact of the global pandemic”.

This will be a major concern for the North’s aerospace sector which contributes more than £1.9 billion (€2.16 billion) to the Northern Ireland economy.

Bombardier, the cornerstone of the sector, has temporarily stopped production at all of its sites in the North until April 20th, while Portadown-based Thompson Aero, which manufactured business class seats for Aer Lingus, has also laid off 330 “agency, temporary and contractor workers”.

The company, which is part of the Chinese owned Aviation Industry Corporation, said that the decision to axe jobs in Northern Ireland was linked to the coronavirus crisis because its global customers had to “delay, reduce and reschedule their orders”.

But it is not just manufacturing companies that operate in the aerospace sector that are struggling in the North.

Caterpillar has said it will halt production at its Springvale facility in Belfast from April 6th through to April 24th.

About 140 people will be “furloughed” in line with the UK Government job retention scheme over the period, said a company spokesman.