NI companies warned over safety as workers walk out 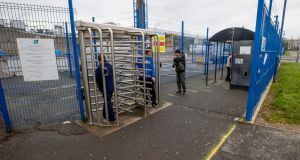 Last week Moy Park, which is one of Europe’s largest poultry processors, said it would create “hundreds” of temporary jobs at its Northern Ireland sites because of a “heightened demand for chicken produce”.

Northern Ireland’s First Minister has warned food production companies in the North to “make sure their employees are safe” as they step up production levels in response to increased customer demand during the coronavirus crisis.

Speaking at Stormont, Arlene Foster said: “Our food supply chain here in Northern Ireland provides us with fabulous local produce, we want that to continue during this very difficult time, but we are saying, and I know that the economy Minister has had many telephone conversations about this with leaders of industry, we need them to make sure that their employees are safe”.

Ms Foster’s warning to the food production sector came as union leaders highlighted walk outs by workers at two of the North’s largest food producers over concerns about “health and safety protections” in relation to Covid-19.

The Unite trade union said workers at Moy Park’s facility in Portadown and the Goodman-owned ABP in Lurgan, Co Armagh had walked out of their workplace because of “health and safety concerns”.

Sean McKeever, Unite’s regional officer, claimed there had been a “mass walkout of workers at Moy Park”.

“Up to 1,000 workers have walked out of the Seagoe Moy Park site in Portadown. This follows the failure of the biggest employer in Northern Ireland to provide basic health and safety protections to its workforce,” he said.

Mr Mc Keever said the union had put forward proposals for health and safety protections for Moy Park workers but these had been rejected by the poultry processor.

However Moy Park said the health and well-being of its staff was its most important consideration and pointed to “new, robust measures” to keep them safe. It also disputed Unite’s estimate of the number of staff who had walked out and said that “100 team members walked out”.

Moy Park said it was taking on board feedback from staff, adding that it had already identified seven ways to enhance social distancing. These include staggering breaks, re-spacing workstations and communal areas as well as installing screens on appropriate production lines.

“Our teams are playing a vital role in keeping food production moving and feeding the nation. We are committed to ensuring they are safe and well to keep providing these essential food products,” Moy Park stated.

Last week Moy Park, which is one of Europe’s largest poultry processors, said it would create “hundreds” of temporary jobs at its Northern Ireland sites because of a “heightened demand for chicken produce”.

Meanwhile in a statement ABP in Lurgan also said that the “safety and well being” of its employees was “paramount” and that it had “introduced a variety of additional measures at all sites in recent weeks in response to Covid-19”.

“These measures include protocols around essential visitors, temperature checking, additional sanitising stations, staggered breaks, additional canteen spaces and many other robust protocols that are in place in food manufacturing facilities,” ABP stated.

One of the North’s leading business organisations believes firms in Northern Ireland are “trying to do the right thing” in response to the coronavirus.

Angela McGowan, CBI Northern Ireland director, said: “Many firms in critical sectors have implemented huge changes in the workforce to keep their employees safe, while simultaneously ensuring that essential products and services keep flowing.  For example, measures such as installing screens, changing work patterns, depopulating the building, and regular and extensive cleaning have been implemented in many places of work.

“Both businesses and people must make every effort to follow social distancing guidance in very difficult circumstances.”

1 Donohoe’s new role, House of Ireland shuts, and being indispensable at work
2 ‘Sad day’ for House of Ireland as tourism retailer goes out of business
3 ‘My rent here is so low it’s a joke’
4 Paschal Donohoe’s election as Eurogroup president ‘a great win for Ireland’, says Taoiseach
5 Caveat: The tourism sector deserves to be taken more seriously in this crisis
6 Donohoe’s new role puts State at centre of debate over EU’s future
7 The €1 billion market: retailers who serve tourists face double trouble in a pandemic
8 Remote working: How to get ahead in a changed world
9 Gardaí raid Irish office of failed German payments group Wirecard
10 Ryanair accuses ‘screen scrapers’ of blocking refunds
Real news has value SUBSCRIBE

Dalata agrees new debt facility as it recovers from Covid-19 07:58
Donohoe’s new role, House of Ireland shuts, and being indispensable at work 06:30
Getting back to business after the Covid-19 shutdown 05:56
The €1 billion market: retailers who serve tourists face double trouble in a pandemic 05:50
Nominees announced for third Irish Times Business Awards 05:45
Search executive
jobs on irishtimes.com