Covid-19: Inside the operation to evacuate Irish stranded abroad

From Peru and Australia: Behind the scenes story of how diplomats got the Irish home 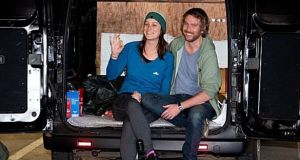 Neil Cooney (34) and his partner Kath (32) after their arrival at Dublin Airport from Peru. Photograph: Tom Honan/The Irish Times

Ten hours into a gruelling bus journey from Tarapoto, a city on the edge of the Amazon in northern Peru, the bus carrying Irish citizens to Lima for a flight home was stopped by two local police officers.

The minibus was one of five organised by Irish diplomats to help more than 130 Irish citizens and family members, following Peru’s decision on March 16th to lock down the country to halt the spread of coronavirus.

More than 4,000km away in Santiago, Irish Ambassador to Chile and Peru Paul Gleeson received a phone call from one of the alarmed passengers on the stopped bus.

“I was on the phone to two police officers, pleading with them not to turn [it] back,” said Mr Gleeson. Following the Ambassador’s intervention the police eventually allowed the bus to continue.

Commercial flights out of Peru had been stopped and travel between regions prohibited, leaving Irish diplomats scrambling to arrange permission for the buses to clear roadblocks and checkpoints.

“The local and regional authorities were very wary of having Europeans drive through the areas” as public sentiment blamed European backpackers for “bringing the virus to Peru,” Mr Gleeson told The Irish Times.

“We were getting messages to say the police were not letting them off the bus to use the bathroom,” he said.

After 30 hours by road the small bus from Tarapoto arrived in time to board a 14-hour flight to London, with Aer Lingus then flying the weary passengers to Dublin last Monday.

The Department of Foreign Affairs had worked closely with the British Foreign Office. Besides the Irish, the Tarapoto bus carried four British, one Estonian and one Finn, as the British had also negotiated a Sunday night evacuation flight.

In all, five buses ferried people to Lima. Irish diplomats handled three of the buses: Tarapoto, a 22-hour journey from Cusco, and a 24-hour bus from Puno, in southeastern Peru.

Fiona Feeney (29) and Colleen Kehoe (30), from Co Galway, had been backpacking across South America since January and would likely still be stuck in Peru if not for the flight home.

“We got to Lima maybe at 8pm and we walked into the Irish pub and the president was just announcing a lockdown. We tried that night to get home, the airport was just carnage,” said Ms Feeney.

They rushed to book flights with prices “going up by the minute”, only to find each one fully booked, unaffordable, or cancelled, said Ms Kehoe.

The Peruvian military enforced a strict lockdown regime from March 16th, with people allowed outdoors only for essential shopping and an 8pm curfew in place.

The Irish Embassy attempted to get Irish citizens out on final commercial flights, but by the weekend of March 21st officials decided that an evacuation flight was needed, said Mr Gleeson.

That Sunday Minister for Foreign Affairs Simon Coveney announced arrangements were being made for a repatriation flight, but this “was only the end of the beginning”, said Mr Gleeson.

Officials faced two main obstacles: first, to secure approval for the flight from Peruvian authorities; and then to get Irish citizens scattered across the country to Lima.

In the first half of that week diplomats, local embassy staff, and an honorary consul in Peru planned the routes, while drawing up a list of citizens that needed to be aboard, he continued.

From his dining room table in Santiago Mr Gleeson kept in touch with many of the travellers via email and WhatsApp, though diplomats still had not received confirmation that they could charter a flight.

The Chilean-based Ms Gleeson, from Drumcondra, north Dublin, previously worked as a policy director in the Tánaiste’s office, and before that as consul general in Atlanta.

The Embassy was only opened last year, so it could not rely on extensive relationships with state officials built up over decades that more established embassies would have had.

The “breakthrough” came in a call set up between Mr Coveney and Peru’s foreign affairs minister Gustavo Meza-Cuadra the Thursday before the flight, according to several sources.

While the Embassy did not have an inside line to the Peruvian foreign affairs minister, a senior Irish diplomat in New York did; since Mr Meza-Cuadra had previously served as Peru’s representative to the United Nations.

There, he had enjoyed a good relationship with his Irish counterpart, Geraldine Byrne Nason, who helped set up the call with Mr Coveney. In the call, he confirmed that a repatriation flight could leave last Sunday.

The first of the five buses left for Lima from Tarapoto last Friday night week, with a passenger list sent hurriedly to local and regional police to ensure safe passage.

One of the buses coming from Puno was badly delayed, leading to fears it would not make the later of two flights leaving that night: “We were starting to book hotel rooms in the city for that night,” said Mr Gleeson.

However, the group, including Neil Cooney (34) and his partner Kath (32), who had been stuck in Arequipa, made it on to the runway of the military airport, with just minutes to spare before the British Airways flight left.

“We’ve been on our honeymoon since Christmas in South America, we were in Peru for three weeks . . . We had just over six months planned, so we cut short three months,” said Mr Cooney, when he arrived back in Dublin.

Today, there are still up to 20 Irish tourists in Peru. About half of them want to come home but are in regions inaccessible by road, or they are held in quarantined hostels, said Mr Gleeson.

Having brought back 11 citizens from other EU countries, Irish officials now hope to find places for those Irish on other European governments’ repatriation flights, when they are organised.

Across the other side of the Pacific Ocean, more than a thousand Irish citizens were similarly facing difficulties getting home from Australia, including Irish doctors who had volunteered to come home to help Irish hospitals.

After an email to the Irish Embassy in Canberra, Dr Zoey Lynch (27) was told to put together a list of the names and passport details of doctors who wanted to return.

“I had about 60 to 65 names within 20 minutes, all Irish doctors living in Perth who were keen, which grew to over 90,” she said after she landed in Dublin. “We’re all incredibly keen to get involved.”

Irish Ambassador to Australia Breandán Ó Caollaí and staff had created a full list of travellers, drawing on names known by the Irish Australian Chamber of Commerce, welfare groups, GAA clubs and the Embassy’s own register.

Behind the scene efforts had been under way with Australian airline Qantas, whose chief executive Alan Joyce hails from Tallaght, to charter a flight for the Irish.

Late on Tuesday March 24th, the Australian authorities gave approval for the flight, with diplomats receiving confirmation on Wednesday morning it would leave at 10pm that night.

“At 8:30am we started contacting people, particularly anybody with a medical background, using all our connections and the list of contacts . . . this was Team Ireland working,” said Mr Ó Caollaí.

Previously the consul general in Boston, the Ambassador was well used to working with big emigrant communities but the time available was “incredibly tight” .

Canberra is three hours ahead of Perth, and a “significant number” of stranded Irish were in Melbourne, four hours flight away from Perth, he said.

Those included four men in their mid-20s, Eoghan Lally, John Mulhearn, Conor Leavy, and Philip Denmead, who had been travelling up the east coast to surf when the global health crisis began to develop.

Told that morning that four seats were available if they could get to Perth, the group hurried. “We flew from Melbourne to Perth that day just to make it in time,” said Mr Leavy.

They had planned to stay in Australia but changed their minds as the crisis worsened. “It all kicked off very fast, one day we came back off a beach and everything was starting to shut down,” said Mr Lally.

More than 1,000 stranded Irish had contacted the Irish-Australian chamber of commerce, whose chief executive Barry Corr then lobbied Qatar Airways to insist the demand was there.

A Navan-based travel agency run by Eimer Hannon managed this operation, diverting all 23 staff to handle calls and payments from the Irish. All five flights were block-booked.

Many who had already lost thousands on cancelled flights were “terrified” that they would pay for their seats only then to find that this flight would be cancelled, too, said Ms Hannon.

The “Bring Them Home” repatriation effort has been co-ordinated by the Department of Foreign Affairs’ consular division in Dublin. Usually, it has 38 staff. Currently, 90 extra officials have been drafted in.

More than 400 Irish have been flown home on repatriation flights chartered by other EU countries and Britain, according to Elizabeth McCullough, the department’s consular director

Foreign Affairs had helped more than 1,800 citizens to get home, by every means possible. Seven were brought home on an American flight out of Africa, getting off in Shannon when the aircraft landed to refuel.

However, senior diplomats are concerned that “significant numbers” of Irish are stuck in India, Thailand, and Pakistan, where commercial flights have been halted or scaled back and internal travel restricted.

Diplomatic operations to repatriate these citizens, who are spread across vast countries under effective travel lockdown, will be incredibly complex, according to sources.