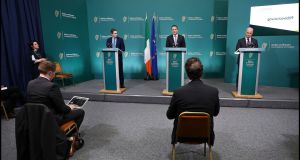 Every day at 9am, after the offices and corridors have been deep-cleaned, Ireland’s top civil servants come together to discuss their departments’ responses to the coronavirus crisis.

The conversation sets the daily agenda and, in a sign of the times, it takes place remotely, with senior officials dialling in.

Liz Canavan of the Department of the Taoiseach, an increasingly familiar face from broadcasts of Government’s pandemic briefings, heads up the discussion and is fed the latest developments from communications staff in the various departments.

The meeting is an example of how Government is adapting work practices in this era of distancing. While the majority of civil servants are working from home, a core team from each department must be present, including Ministers, their advisers and officials such as secretaries general.

Outside of these central groups, who hold individual departmental discussions with at least 2m between them, meetings for the rest of the day take place through video conference or the phone.

While there is an acute awareness of the importance of keeping coronavirus at bay, there is an acceptance it is “inevitable” that some senior Government members will fall ill with it. This belief has prompted delicate discussions about so-called “designated survivors” at Cabinet level. But there is, as one senior source puts it, “no perfect solution”.

One school of thought is that should Taoiseach Leo Varadkar and Tánaiste Simon Coveney be left unable to work as a result of Covid-19, the Dáil might be asked to elect an interim taoiseach. For this very reason, Varadkar and Coveney will not be seen in the same room for the foreseeable future.

The two, who have built up a strong relationship since being rivals to succeed Enda Kenny as taoiseach, speak regularly but by phone and video-conference. Cabinet meetings and associated committees are held in similar ways, with the aim of keeping everyone in the loop but separated.

Should Minister for Health Simon Harris become incapacitated, any other senior Minister can be temporarily assigned his duties until he recovers. The power to do this rests with the Taoiseach and, legally speaking, Dáil approval should not be needed.

The best-case scenario is that those who fall ill with the virus do not suffer severe symptoms and can work from home, as UK prime minister Boris Johnson has done.

Privately, some Ministers say they fear their power is being diluted by the increasingly dominant role of civil servants

Varadkar has also addressed the issue of enforcing social distancing at Cabinet meetings and explained the system in place to ensure his Ministers are not all exposed to the virus at once.

“Minister [for Education Joe] McHugh joined us by phone at Cabinet today,” he said last week. “We are having unusual Cabinet meetings – we’re in separate rooms with some people coming in by video conference and others by voice conference and that’s done for the obvious reasons around social distancing, that none of us spend more than two hours in the same room together. And if a group of us gets sick, there’ll still be a ‘Core A’ group that can be the Government.”

Some Ministers are rotating their advisers so that should one succumb, another will be available to deal with the press or address policy issues.

These changed working practices have not been without difficulty.

Privately, some Ministers say they fear their power is being diluted by the increasingly dominant role of civil servants, and the aforementioned morning briefings are not lessening their unease. They are concerned about being “cut off” from the decision-making process, and this fear has been deepened by the loss of the usual face-to-face communication between Cabinet members.

“There is a fear that the civil service is using the political vacuum to assert control and that [Ministers] cannot say anything that is not run through the Covid-19 crisis communications group first,” said one Minister.

Whether this extra level of bureaucracy hampers or helps the national response to the pandemic in the weeks ahead remains to be seen. But there is no doubt those in top-tier politics, like the rest of the public, are living through an unprecedented time.

“There have been tensions about the balance of power,”the Minster said.

1 Covid-19: Easing of restrictions ‘unlikely’ to be speeded-up
2 Couple injured in shooting incident at farm in Co Waterford
3 ‘Frustrated and angry’: Thousands march in Dublin to protest death of George Floyd
4 Coronavirus: One more death in Republic as expert warns house parties are ‘disaster’ for containment
5 US protests continue amid curfews, arrest threats and plea from George Floyd’s brother
Real news has value SUBSCRIBE