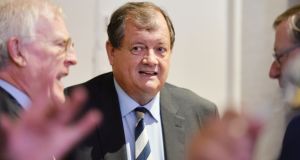 The group, which has €7.7 billion of annual sales, filed an agreement between banks underpinning the share sale – known as an underwriting agreement – as well a shareholder agreement and sign-off forms from its solicitors in Luxembourg and auditors in Dublin.

It is believed that the Ardagh Group will begin marketing the share sale imminently ahead of a flotation by the end of the month, which is expected to give the group an equity value of as much as €5 billion. A spokesman for the group declined to comment.

Ardagh’s executive chairman, Dublin financier Paul Coulson, signalled last month that the group was planning to float on the New York Stock Exchange by the end of March as the group opens a new avenue easing the burden of its €7.2 billion of net debt, which has been built up over almost two decades of acquisitive growth. High-profile customers include Coca-Cola, John West and Heineken.

CreditSights, the independent US debt research firm, said in a note to clients on Friday that Ardagh’s creditworthiness “will benefit from a successful scaled-down IPO” as the net debt of the operating company falls to five times ebitda from a ratio of 5.4.

Ardagh carried out its largest-ever deal last June, the $3.4 billion purchase of a beverage cans business from US packaging group Ball and UK rival Rexam. While Ardagh will only sell an initial stake of about 5 per cent, the deal could value the group’s equity at between €5.3 billion and €6.7 billion, based on valuations elsewhere in the sector.

The initial public offering (IPO) is being structured in a way where a Luxembourg-based holding company, called ARD Holdings, will sell shares in the operating company, Ardagh Group, which will be the listed entity. One of the filings with the US Securities and Exchange Commission late last week set out the future relationship between both companies, including the quoted-company’s intention to pay enough in dividends to allow the holding company to interest payments on high-cost debt it issued last year.

Coulson said the plan is to pay total dividends of €135 million a year, though most will go to the holding company to meet its interest payment needs.

A separate filing covers the share sale underwriting agreement between banks and securities firms, led by Citigroup, who will share multi-million euro fees related to the transaction. Deutsche Bank, Goldman Sachs, Barclays, Credit Suisse, JP Morgan, Davy in Dublin and Wells Fargo are among the underwriters of the deal. ARD Holdings and company directors have agreed not to sell any further stock in Ardagh Group for 180 days – in what is known as a lock-up period – after the IPO, unless Citigroup gives consent.