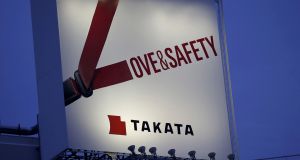 Japan’s Takata removed a major obstacle to its potential sale or restructuring, pleading guilty in a US federal court to a felony charge as part of a $1 billion settlement that included compensation funds for carmakers and victims of its faulty airbag inflators.

US district court judge George Steeh approved the previously agreed settlement, despite objections from lawyers for victims of Takata inflator explosions that the criminal settlement identified carmakers as victims of fraudulent activity.

With the criminal settlement and penalties set in the United States, where the majority of airbag-related fatalities and injuries have occurred, the automotive parts company is expected to continue its search for a buyer or financial backer, a process which has dragged on for a year.

“Achieving a plea bargain in the United States shows some progress, and could help to revive stagnated talks in Japan,” SBI Securities senior analyst Koji Endo said in Tokyo.

The judge said he considered imposing a stiffer sentence, noting federal guidelines allowed for up to $1.5 billion in fines. But the judge said he approved the settlement because Takata could otherwise be pushed into bankruptcy, delaying efforts to replace millions of potentially deadly inflators still on the road. – (Reuters)