Gary McGann exits Smurfit board due to Aryzta role workload 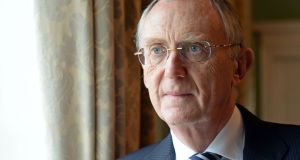 Gary McGann joined Smurfit as chief financial officer in 1998 and has been associated with the company since. Photograph: Eric Luke

Smurfit Kappa’s former chief executive, Gary McGann, plans to step down from the paper and packaging group’s board in May, as he devotes himself to restructuring and finding a new executive team at embattled baked products group Aryzta.

When Mr McGann took over as chairman of the Swiss-Irish food company behind Cuisine de France in December, he committed to stepping down from some other publicly quoted company boards. This was to comply with Aryzta’s own corporate governance rules, which state that non-executive directors can only serve on up to three additional publicly-quoted companies on an ongoing basis.

Aryzta’s then chairman Denis Lucey told Aryzta shareholders in November that Mr McGann was committed to “complying in full with the spirit as well as the letter of this requirement” within six months of his appointment.

Mr McGann (66), who joined Smurfit Kappa as chief financial officer in 1998, was elevated to the board two years later and became chief executive in 2002. He remained on the company’s board as a non-executive director after retiring as chief executive in August 2015 and is also also chairman of bookmaker Paddy Power and a non-executive director on the boards of property company Green Reit as well as US firm Multi Packaging Solutions.

Smurfit Kappa chairman Liam O’Mahony thanked Mr McGann “for his outstanding achievements while leading the group as chief executive from 2002 to 2015”. The company said that another non-executive director, Thomas Brodin, will not seek re-election at the company’s annual general meeting on May 5th either.

Mr McGann’s decision to step down from Smurfit Kappa’s board comes as he seeks to overhaul Aryzta, whose shares have slumped by 57 per cent over the past two years amid a series of profit warnings and weak earnings statements. Last month, the group’s chief executive Owen Killian, chief financial officer Patrick McEniff and head of the Americas division, John Yamin, each tendered their resignation - just weeks after it issued the latest profits alert.

The company now has a market value of €2.8 billion.

Aryzta also signalled last month that it would sell its 49 per cent stake in French frozen foods company Picard, which it acquired two years ago for €450 million. The acquisition was badly received at the time by analysts.

Aryzta also faces having to refinance €600 million of debt within the next year.