Manufacturing activity continues to improve but at slower rate

Investec’s latest PMI softens for a second successive month, though still above 50 line 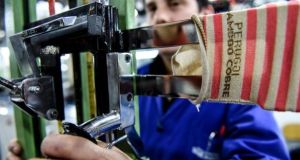 Activity in manufacturing continues to improve on the back of new orders, although the pace of growth has slowed for a second successive month.

Investec’s headline purchasing managers’ index (PMI) softened slightly to 53.8 in February from 55.5 the previous month, but remained above the 50 line that separates growth from contraction.

The subindex for new orders again rose sharply, with a number of panellists mentioning an improvement in market conditions.

The gauge measuring new export orders posted a sixth successive monthly increase, with the rate of growth described as “substantial and the joint-fastest since July 2015”.

The subindex for output also rose, though the rate of growth eased to the weakest since last October. Where production did increase, this was linked by panellists to higher new orders, including those from export markets, the survey noted.

Manufacturing firms also reported a softening in growth in “backlogs of work” for a third successive month, with only a slight increase recorded in February. The survey also linked this moderation to the recent growth in hiring in the sector – the employment component recording a fifth-successive above-50 reading.

Higher production requirements and plans for further expansion in coming months prompted manufacturers to hire more staff in February, extending the sequence to five consecutive months, though the rate of job creation was the slowest since last October.

On the margin side, output prices rose again in February as manufacturers passed on higher input costs to clients. The main input cost pressures came from higher prices for raw materials such as steel, plastics and resin.

More than 11 times as many firms recorded an increase in input costs compared with the number who reported a decrease, the survey noted.

“Despite the uncertainty alluded to above, Irish manufacturers remain upbeat on the outlook, with more than 15 times as many firms expecting to see output maintained or increased over the coming 12 months as against those who anticipate a decrease,” Investec’s Philip O’Sullivan said.

“All told, while this report shows that manufacturers are currently under pressure from a number of sources, it is also clear that most firms expect to be able to overcome this and record further growth over the coming year,” he said.