Ires doubles down on building plan, Dr Pepper for Kildare, and staycations for all 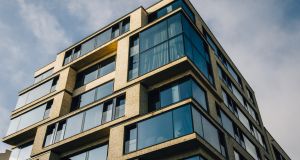 The Republic’s biggest landlord will press ahead with plans to build almost 600 apartments despite fears that a new government could freeze rents, its chief executive said. Barry O’Halloran reports that Irish Residential Properties Real Estate Investment Trust (Ires Reit), collected €62 million in rent from tenants in its 3,666 apartments in the Republic last year.

The company behind Dr Pepper and 7Up is in advanced talks to take over Lidl’s former distribution centre in Newbridge, Co Kildare. Charlie Taylor reports that such a move would see Keurig Dr Pepper, which also owns Krispy Kreme, setting up in the Republic for the first time at group level.

Joe Brennan reports that Lloyds Banking Group, which has been in a standoff for more than six years with UK authorities over the tax treatment of Irish crisis-era losses, has seen its potential related bill soar by a third during the period to £800 million (€954 million).

Joe also has details of plans by low-cost gym chain Flyefit to raise tens of millions of euro to fund a doubling of its network to 35 locations over the coming years.

As coronavirus continues to spread, Joe Brennan and Simon Carswell look at the growing economic impact of the outbreak, and the negative effect it’s having on Irish companies that have operations in China. They ask in our Business Agenda section how bad things could get for the wider economy if the virus is not contained.

John FitzGerald has culture and the arts on his mind this week, specifically where they meet and can benefit the economy. From Yeats to Westlife and Daniel O’Donnell, he reflects on how Irish culture’s importance on the world stage has grown since his own student travels in the 1960s, and urges a more active plan to harness its value into the future.

In Brexit Proof, Michael Murphy of Monaghan-based railway suplies company Riival tells Ruth O’Connor how he has tried to transform Brexit from a threat into an opportunity. “ Our strategy for the next few years is to grow the UK market and we don’t see Brexit changing that,” he says.

In our Work section, Olive Keogh considers the art of public speaking, which is a necessary part of life in many spheres, but which can be incredibly difficult for many of us. She asks an expert for his practical tips.