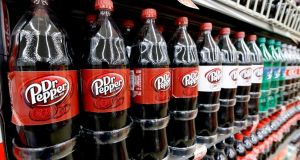 The ultimate owner of Keurig Dr Pepper is JAB Holding

The company behind Dr Pepper and 7Up is in advanced talks to take over Lidl’s former distribution centre in Newbridge, Co Kildare.

The warehouse, which was built on a 48-acre site in 2000, was vacated late last year when the German supermarket group opened a new €100 million centre nearby.

Keurig Dr Pepper did not respond to a request for comment on a possible deal. IDA Ireland, the State agency responsible for attracting foreign investment, said it did not comment on speculation.

Keurig Dr Pepper has a portfolio of more than 125 brands that also includes Snapple, Peet’s Coffee, Canada Dry and Sunkist.

The group was formed in 2018 with the $21 billion (€19.5 billion) merger of Keurig Green Mountain and Dr Pepper Snapple Group. It is the seventh-largest food and beverage company in the US, with annual revenues of more than $11 billion and more than 25,000 employees.

The group owns more than 100 distribution centres globally. If the deal is completed, it will mark the first time Keurig Dr Pepper has established group operations in the State. One of its key brands, Krispy Kreme Doughnuts, opened an outlet in Blanchardstown in Dublin in 2018 that has become the most profitable of the company’s 1,300 stores.

The group’s ultimate owner is a German family, who control the company through the JAB Holding conglomerate. The Reimanns are one of Germany’s richest families. They made headlines globally last year when it was reported that family members had decided to donate €10 million to charity after learning that their ancestors supported Adolf Hitler and used forced labour under the Nazi regime.

The site is adjacent to a Pfizer factory, a Wyeth pharma plant and Lidl’s new 54,000sq m distribution centre.

The German retailer announced plans to construct the hub in September 2018, in what represents the group’s largest single capital investment in the Irish market to date. Lidl moved into the new distribution centre late last November.