Excessive scale of proposed building cited as cause for refusal 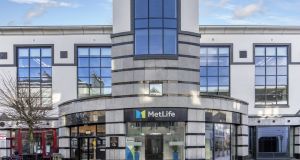 Development included a substantial renovation and expansion of the adjoining Hynes Building (above), which houses Galway City Library. File photograph.

Plans for a major office development in Galway city centre have suffered a major setback after An Bord Pleanála refused it planning permission because of the excessive scale of the proposed building.

The board upheld the decision of Galway City Council not to approve plans for a new seven-storey office block incorporating a new children’s library on St Augustine Street in Galway together with a substantial renovation and expansion of the adjoining Hynes Building, which houses Galway City Library.

It rejected an appeal by the developer, the O’Malley Group (Homes and Development), whose plans included adding an extra three storeys to the Hynes Building, while demolishing a smaller commercial block known as St Clare’s Walk building.

The Galway-based construction company had claimed the council was inconsistent in its approach to development of the site as it had previously approved a higher plot ratio for alternations to the existing building in 2016.

The O’Malley Group said the council’s assessment of its proposal purely on the basis of plot ratio was a “narrow focus”.

It noted there were precedents in the area of the local authority permitting higher plot ratios as well as allowing additional storeys.

The company said the St Clare’s Walk building was inefficient and not up to modern standards. It claimed the proposed development would provide improved accommodation and would have a positive impact on a city centre location. It also offered to reduce the height of the new office block by one storey if it was considered necessary by An Bord Pleanála.

Dismissing the O’Malley Group’s appeal, however, the board said the proposed development would have an overbearing impact on the streetscape.

It claimed the design and visual appearance of what was proposed would detract from the character of the area and would “set an undesirable precedent for similar development in the future”.

The development was also opposed by one of the tenants of the Hynes Building, MetLife Innovation, because of the negative impact of the construction phase on its business and An Taisce which said it would have an adverse visual impact on Galway’s architectural heritage and character.