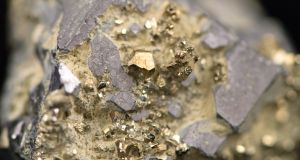 The company controls a large tract of land in the US state of Nevada said to be rich in gold, silver and copper. Photograph: iStock

Shares in exploration firm Great Western Mining, which has its headquarters in Dublin, plummeted more than 30 per cent on Thursday after it raised funds in a discounted share placing. The stock ended the day 24 per cent weaker at 0.11 pence.

The company, which controls a large tract of land in the US state of Nevada said to be rich in gold, silver and copper, raised £320,000 (€382,217) before expenses after issuing more than 290 million shares at a price of 0.11 pence each, a 31 per cent discount to the 0.16 pence closing price on Wednesday.

It said the proceeds would be used to “accelerate exploitation of gold prospects already sampled” at some of its mines.

“The funding will also allow the company to pursue and complete an acquisition of an already-defined new gold opportunity elsewhere in Nevada,” the company added in an update to the stock exchange.

The non-revenue-generating explorer flagged in September that it would require additional funding as it reported a loss of €393,988 in the six months to the end of June last year.