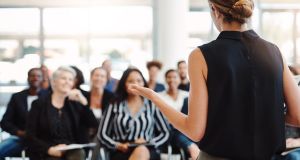 The room falls silent with expectation, the speaker gets to their feet and within 30 seconds the whole room knows whether they’re in safe hands or not. A well-polished presenter comes across as calm, confident and in control of both themselves and their subject matter and people immediately relax. By contrast, a nervous or hesitant presenter makes an audience feel uncomfortable because their uncertainty is palpable and everyone is just waiting for them to mess up.

Smooth-talking presenters are rarely born that way. Most acquire the skill over time and, while there are all sorts of wacky suggestions for getting someone through a public speaking event from imaging the audience in their underwear to having a stiff drink beforehand for Dutch courage, those who train people in presentation skills for a living say there is no substitute for old-fashioned practice.

Quite simply, the more you seize the opportunities to speak and present, the easier it becomes and the better you’ll get at it. You learn to cloak your nervousness, glide over glitches with humour and to become less easily distracted by people moving about within the room.

One of the biggest offenders when it comes to presentations is the over use of AV material. Videos and slides have their place, but most people have experienced “death by PowerPoint” where a speaker insists on reading every slide to an audience that quickly loses all interest in what’s being said.

Slides are useful for driving home pertinent points, but using them as a substitute for eye contact alienates an audience. Most audiences want to connect with a speaker and they can’t do that if the speaker doesn’t look at them especially in a small group.

“Slides are the bane of people’s lives. They’re trotted out for everything and anything but, if you really want to get through to an audience, put them away and talk to people directly,” says Anthony Garvey, managing director of Confident Presenting. “By all means have your pitch deck or your presentation available if someone wants to see it afterwards, but those who are really adept at using slides in a presentation rarely look at them. They know what slide is coming next and while it’s there to back them up, all of their effort is going into the interpersonal communication.”

Even the best public speakers feel a frisson of nervousness before they present and that little adrenaline surge helps keep them animated as they deliver. However, Garvey says even accomplished speakers need friendly faces in a room. “Scan the audience for those you feel are willing you to do well, the ones who are smiling and look interested and bring them with you,” he says.

He also suggests thinking outside the box when it comes to deciding on the best presentation method, as most people tend to get into a comfortable pattern and stick with it.

As an example, he cites a group of workers who had raised money for a charity and were trying to get their organisation to match the funding. They had prepared a perfectly good presentation with all the facts and figures but, having seen it, Garvey advised them to put it to one side and to tell the story from the perspective of someone who would benefit from the charity’s work. “People like stories, they like to be drawn in to what you’re telling them whether it’s closing a sales pitch, selling your company, motivating your team or presenting financial results to shareholders,” he says.

Garvey spends a lot of time in companies providing communications and presentation training and he says that younger employees are often quite good at presenting because presentations have become part of an increasing number of third-level courses. By contrast, more senior employees who grew up in an environment with greater reliance on the written word are often the ones whose presentation skills could do with improvement especially if they are the public face of their organisation.

Good presentations take time because they need coherence and a solid structure. They need to be accurately timed and the speaker needs to be sufficiently confident with their material that if the power fails or they hit the wrong button and their slides disappear, they can keep going. Stay away from alcohol, coffee and energy drinks before presenting Garvey advises to avoid feeling jittery and never underestimate the power of practice.

“You don’t arrive at a swimming pool as a non-swimmer and jump in at the deep end,” says Garvey, an accomplished public speaker and president of Tralee Toastmasters. “You learn the basics, then you start improving and you get better and better as you practise. If you don’t want to practise on your work colleagues, then join an organisation like Toastmasters which is a supportive environment where people can hone their speaking skills.

“Get someone to video your presentation as you’ll quickly see if you fidget or mumble when you’re speaking,” he adds. “Wherever possible check the venue beforehand and make sure any technology you need is there and working.

“Be mindful of your allocated time and your dress code and put as much time into preparing for the Q&A that follows your presentation as into the presentation itself.

“Finally, don’t rush off immediately after you speak. People will want to talk to you so it’s an opportunity to spend a bit of time networking and building relationships.”