If the crisis continues much longer, there are fears some firms may face ‘significant stress’ 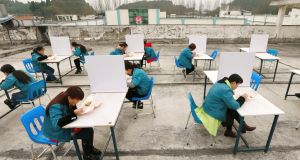 Factory workers separated by partitions as a precaution against infection as they take their lunch break on the roof of an electronics factory in Suining in southwestern China’s Sichuan Province. Photograph: Chinatopix via AP

Dublin-based entrepreneur Maurice Healy says nobody from his “crew” in China has returned to work yet after the extended holiday for the lunar new year.

Movements of people and workers has been severely curtailed in China as authorities attempt to stem the contagion from the coronavirus that has resulted in more than 2,000 deaths and left almost half the population living under some form of travel restriction.

Healy Group imports about €15 million worth of vitamins and other ingredients for pharmaceutical and nutritional products every year for use by its manufacturing clients across the globe. China is one of the biggest manufacturers of raw materials that go into vitamin C supplements.

Traditionally, it is the first week of March before full production returns in China due to the lunar year holiday period, but the extended break due to the virus and ongoing restrictions on travel and movement of people have knocked out schedules this year.

“I doubt I will be taking any materials of any significant amount in the coming weeks,” says Healy, who is still trying to assess when things might return to normal. “I wish to God I could tell. There is no certainty from the conversations I have been having and I am having those conversations two or three or four times a day.”

Our plants right now are back working, but probably working at 30 per cent of capacity

With the level of recorded cases of the infection now at over 75,000, almost 99 per cent of which are in China, companies across the world are desperately working out their exposure to the fallout as the virus disrupts supply chains, manufacturing plants, and business and consumer demand in the world’s most populous nation, an engine of global growth.

This week alone has seen tech giant Apple warn about how the outbreak is hurting business in China more than previously thought; Adidas and Puma reveal how production and demand for their German sportswear have taken a hit in Asia; Jaguar Land Rover resort to having car parts flown from China to the UK in suitcases as supplies dwindle; and Beijing reportedly weigh measures such as direct cash infusions and mergers to rescue some of its airlines as the industry has been virtually paralysed.

Kerry Group, the second-biggest company on Dublin’s Iseq stock market, signalled on Tuesday that its sales in China were set to slump by about 30 per cent in the first quarter. Its five manufacturing plants and a technology and innovation centre – which employ a combined 1,100 people – are being run on a “skeleton crew” as it copes with the fallout from the coronavirus, according to chief executive Edmond Scanlon.

“We’re doing everything we can to make sure those 1,100 people and their families are safe,” says Scanlon. “Our plants right now are back working, but probably working at 30 per cent of capacity. We expect that to improve over the coming weeks and months.”

Scanlon says it is “too early to say” whether the decline in demand in China will spread elsewhere. “Right now, we don’t see any impact, with one or two exceptions that are very small, outside of China.”

Although the forecast Chinese hit in the first quarter will shave about €33 million off group sales for the year, it will account for less than 0.5 per cent of the full-year turnover for the group’s key taste and nutrition division.

“I think investors were happy that Kerry called out what they think the impact might be, and the normal expectation is that it’ll make up the lost first-quarter sales as the year progresses,” says Noel O’Halloran, chief investment officer with KBI Global Investors in Dublin.

The market value of Kerry Group jumped as much as 6.3 per cent, to an all-time high of €21.9 billion, on the day of the results as investors focused instead on the company’s otherwise solid full-year figures and outlook.

Although stock markets wobbled worldwide in late January as investors concluded that Chinese authorities had initially under-reported cases of coronavirus, the MSCI All World index, a global equities benchmark, has since rallied 3.5 per cent off its lows to hit a fresh all-time high last week. Wall Street’s S&P 500 index and the pan-European Stoxx 600 are also hovering at record highs as investors bet the fallout will be contained.

“Even if this doesn’t become a global pandemic, the economic effect of what’s going on at the moment is likely be bigger than is currently being priced into the stock market,” says Richard Flood, an investment manager at Brewin Dolphin Ireland. “The market has done very well over the past decade. Prices are moderately high. So there’s a risk of disappointment across the corporate sector from potential disruptions to supply chains, demand and confidence as a result of the coronavirus.”

Ryanair chief executive Michael O’Leary downplayed the long-term impact from coronavirus on business earlier this month, when he became the first chief executive of an Irish-listed company to comment on the issue.

“Our experience of Sars [in 2002-2003] and the Avian bird flu five or six years ago was that, actually, it was mildly good for the short-haul business here in Europe,” O’Leary said on February 3rd. “More people were likely to holiday in Europe rather than travelling long-haul to Asia ... and we would think that would play out again, but we should be wary on the short-term impact.”

Food group Glanbia, which reports full-year results next week, will be expected to field questions from investors on its exposure to the coronavirus. China accounts for less than 2 per cent of the company’s sales and about 130 of its 7,300-strong headcount, according to a spokeswoman.

Glanbia Nutritionals has a production facility about 100km west of Shanghai that is “being operated by a skeleton crew, and we are monitoring our supply chain closely”, she says.

“Glanbia, Kerry and CRH have very, very small direct exposures to China,” says O’Halloran. “The stock market reaction to date has been that this is a major event for China, but beyond that there’s no major global issue. What would make it a global issue would be if there was going to be a knock-on effect on consumer demand in Europe and the US.”

But signs are emerging of potential economic contagion. Germany, which counts China as its most important trading partner, saw domestic investor sentiment drop sharply this month amid fears that the coronavirus would dent world trade, according to a Zew survey, published this week.

Closer to home, companies in Ireland that rely on production in China, or Chinese-made components for use in domestic production lines, are assessing the impact.

Simon McKeever, chief executive of the Irish Exporters’ Association, says that supplies of components from China to Irish manufacturers could become “pretty dire” in a matter of weeks.

Irish exporters are struggling to get products into the Chinese market, while importers could start running out of inventory in the next four to six weeks, according to McKeever.

Wuhan, the city at the centre of the coronavirus outbreak, is a major transit point for international goods, including products from Ireland destined for the Chinese market and components coming the other way.

“It is very difficult to get anything in or out of China at the moment,” says McKeever.

The country has become an increasingly important trade partner and market for Irish companies, particularly for an agrifood sector looking to diversify away from the post-Brexit UK.

China was Ireland’s eighth-largest market for exports, accounting for €5.9 billion worth of goods in 2018, and the fifth-largest for imports, covering €4.7 billion of goods that year.

The growth in China’s economy in the past 15 years means that the coronavirus outbreak will be more damaging for the global economy than the 2003 Sars outbreak. At that time China was the world’s sixth-largest economy. It’s now the second-biggest.

The Irish Exporters’ Association says the Government will have to start looking at providing financial support, such as cashflow lending and short-term loans, to Irish companies whose production lines are affected by disrupted supplies from China.

This call is echoed by employers’ group Ibec, which says technology and electrical device companies may need help from the State to protect jobs and provide additional training to staff who are put on reduced shifts as a result of disruptions caused by the outbreak.

“For some businesses, this is going to very disruptive,” says Fergal O’Brien, director of policy and public affairs at Ibec.

“We are probably at the point where we are hitting production,” says O’Brien. “Like other comparable events with external shocks that you hope will be short term, targeted supports might be needed for companies that might be in significant stress because of this.”

If it is another three months of disruption, we would start to get concerned

The Department of Business, Enterprise and Innovation has said its agencies, including Enterprise Ireland and the IDA, are ready “to work with firms should issues arise”.

“To date no major issues have been raised by clients in relation to supply chains or otherwise,” says a spokeswoman for the department.

The Department of Agriculture, Food and the Marine says it is working with the Irish Embassy in Beijing and Bord Bia in Shanghai to monitor “the possible impact of the Covid-19 virus on trade and are liaising with the food companies exporting to China on an ongoing basis”.

Maurice Healy says Irish importers will need State financial support if disruption continues in China’s factories and production lines. “They will need it if they are to stay open. Otherwise they are going to have to issue protective notices because of their dependency on the supply side of their product,” he says.

Peter Cosgrove, chief executive of Cavan-based engineering group ATA, which imports tungsten from China for use in cutting tools, says his company increased its orders before the coronavirus outbreak because of concerns around tariffs on Chinese goods in the trade war between the US and China. This has left it in a more comfortable position but it might not last.

“We are covered for now but all that would depend on how long the disruption lasts,” he says. “If it is another three months of disruption, we would start to get concerned.”

2 Why the sudden scramble to add sustainability to the C-Suite?