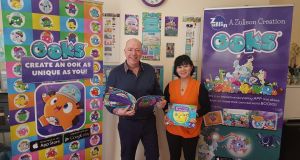 Toy creators Luz and Noel Donegan: The couple’s original idea was for a hybrid digital and real world play product that allowed children to create a highly personalised book. 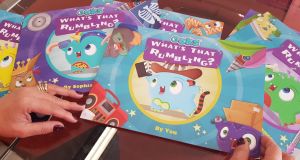 On paper, the idea of two non-techies starting a business wholly dependent on technology does not look promising. But veteran toy creators Luz and Noel Donegan, who had spent over a decade in the competitive world of children’s educational games, were not about to let their creativity be crushed by mere technology.

The Donegans had been following the creep of technology into their industry for over a decade and while they were more at home with traditional games, they were also cognisant of how digital platforms were changing how children play. They recognised that the rate of online play was only going to accelerate and in 2014 took the digital plunge and began developing book authoring app, BookieWookies, which supports reading and creative writing skills in young children.

Four years on and the Donegans are still true to their original concept of instilling a love of books in children. However, a lot of other things about their business have changed. There has been a fundamental rethink of how the product should be presented, a shift in the age profile of their target audience and BookieWookies now has a sister product called OOKS which is where the couple’s undivided attention is currently focused.

“We believe you should never second guess children and never build for them but with them,” Noel Donegan says. “For this reason we decided to test extensively before writing one line of code. It proved to be a wise decision and a pivotal moment for us.”

The couple’s original idea was for a hybrid digital and real world play product that allowed children to create a highly personalised book that could also be purchased as a hard copy. The target age group was three to nine year olds.

However, this plan was scuppered when product testing began.

“Testing showed up a clear 50/50 split in the age groups engaging with the two different play elements and character sets within the product,” Luz Donegan says. “It quickly became clear we needed to divide the offering into two distinct play experiences for two different audiences. The cuddly main characters were adored by pre-school children while the other set of characters caught the attention of the older age groups.

“The issue then was that pre-school children’s entertainment brands are animation led not digital led so we made the pivotal decision to park BookieWookies – even though it was already highly developed – and return to it at a later stage.

“We then turned our attention completely to developing OOKS for children aged five to seven as they were the ones who engaged with it most enthusiastically and are typically the age group that devours digital content.”

(BookieWookies will be launched in due course as the company’s second product and will be animation-based and aimed at pre-school children.)

The educational content of OOKS is designed to improve literacy skills and is suitable for all children regardless of learning ability. “We set ourselves the task of enabling all children to create their very own book with the same freedom of expression and fun they experience when painting and drawing,” Luz Donegan says.

“The app allows them to create their very own OOK character based on their personality. They become invested in this character because it is a reflection of themselves so this is one book they are definitely going to read. The child takes their OOK on an adventure where their artwork adorns the pages and their creative choices direct the narrative. But this is just the tip of the magic.

“While the child is creating their OOKS story, our code is capturing not only the child’s journey through the story, but also every piece of artwork they create. This then becomes a real world book with the child named as the author. The excitement experienced by the child when the postman arrives with their book is enormous and the pride they feel helps build confidence and social skills as they read and share their book with family and friends.”

Creating this level of ultra-personalised play doesn’t come cheap and Noel Donegan says investment in the company to date between angel investors and Enterprise Ireland support is just over €1 million. The company, which now employs eight people, will be going for a second funding round towards the end of this year to build out the team and the brand and to begin customising the product for non-English speakers. China in particular will be a key target market.

OOKS was soft launched last December and so far there have been over 10,000 downloads and 5,000 book orders mainly from Ireland, the UK and the US. The product’s full commercial roll out is scheduled to happen this month (April). The OOKS app is free to use and subject to full parental control. Hard copies of the books created cost just under STG £20 including p&p.

Books are just one aspect of the OOKS story. The company is also in the process of adding OOKS merchandise and clothing and is in discussion with a number of major toy/games producers about the production of OOKS toys and games under licence. An animated TV series is also under consideration by a third party. OOKS clothing and accessories can be customised with the child’s own artwork.

Getting a new business off the ground has as much to do with timing and lucky breaks as with the idea itself. Landing a place on the NDRC’s Launchpad accelerator just as they were starting off was fortuitous for the Donegans.

“Prior to joining the programme we had presented BookieWookies to publishers Penguin Random where it was enthusiastically received, but there was still a big gap between the concept on paper and its digital realisation,” Noel Donegan says.

“The Dublin City Enterprise Board put us in touch with Gary Leyden from the NDRC and without as much as a laptop never mind a pitch deck (what was a pitch deck?) he ‘got us’ straight away and Launchpad was exactly the stepping-stone we needed. They linked us with reputable people to build our original platform, helped us to join up all the dots and as part of Launchpad we also got the opportunity to pitch to a room packed with VCs.

“Our big challenge now is to build on the momentum we have generated. To bring a company from scratch to where it is now is an incredible feeling. To be able to foster a love of literacy, reading, writing, story creation and storytelling in children that will stay with them for a lifetime, is a dream come true.”