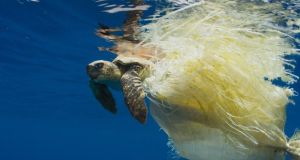 From the Blue Planet 2: a turtle stuck in plastic packaging

If there was a moment that resonated most with viewers watching the last season of BBC’s Blue Planet, it was the footage showing turtles trapped in plastic bags and poisoned stillborn whales.

The final episode of the series showed how a “toxic soup” of industrial waste and plastic is increasingly wreaking havoc on the world’s oceans. Not surprisingly, the scenes caused dismay, leading many viewers to decide to do more to end such a widespread use of plastic.

But while many of us wonder if switching to reusable coffee cups or stepping up the amount of recycling we do at home will really have an impact, one early-stage start-up with strong ties to Ireland is making waves globally with its potential solution to the problem of plastic packaging.

BioCellection is a California-based company established by Miranda Wang and Jeanny Yao, who are both aged 23. The co-founders have developed advanced technologies to transform non-recyclable plastics into virgin-quality chemicals for use in sustainable supply chains.

In addition to participating in the RebelBio accelerator programme in Cork, a period in which they honed their proposition, BioCellection also gained Bill Liao, the Ireland-based co-founder of CoderDojo, and a lead partner at Sean O’Sullivan’s SOSV venture capital firm, as an early investor.

Currently, just 8 per cent of plastic packaging gets recycled with the rest going to landfills, incinerators and oceans. By focusing on the 92 per cent of plastic waste considered too contaminated and difficult to recycle, BioCellection believes it is unlocking a massive resource that could lead to unprecedented opportunities, not just for themselves but for humanity as a whole.

The co-founders met in eighth grade when both joined their school’s environment club. As teenagers they uncovered a way to break down plastics after discovering a novel bacteria that ate phthalates in their local river. Phthalates are a component of plastic found in cosmetics, paints, children’s toys and more. The global production of phthalates is estimated at three million tonnes per year and it is therefore considered to be a major pollutant.

After receiving a national commercialisation award and an invite to appear at the Ted Talks conference, the two decided to establish BioCellection in 2015 to develop scalable technologies to solve the issue of non-recyclable plastics by looking at it initially from a synthetic biology approach. However, it moved towards a chemistry-led solution after discovering systems for turning polymers in biodegradable chemicals around faster.

Last year the company teamed up with the City of San Jose and GreenWaste Recovery in an unprecedented “hard to recycle plastics upcycling” pilot programme to experiment on leftover materials that are usually sent to landfills.

It is now preparing a pilot to process about 17 metric tons of dirty plastic films such as carrier bags in the bay area of San Francisco with plans to scale further with a goal to help Silicon Valley to ultimately achieve zero waste.

The company has raised more than $1 million in angel investment and grants from backers that include former Dragon’s Den investor Sean O’Sullivan’s SOSV and the Schmidt Marine Technology Partners, which was established by ex-Google executive chairman Eric Schmidt and his wife Wendy.

It is expecting to start raising further funds shortly as it looks to exploit its novel solution.

“The commercial potential of our business is twofold. We receive payments for the waste materials that we use and we can also sell our own products to a large audience who would be directly helping to prevent plastics from entering landfills and oceans by buying from us,” Wang told The Irish Times.

The company is already pre-selling its first product – a biodegradable touch screen cleaner – via its website and more are expected in the coming years.

“Our technology opens the possibility for very creative and novel business models. We find ourselves capable of working with consumers, brands that sell to consumers, industrial manufacturers, waste and recycling plants, city government and non-profits,” Wang added.

In 2015 BioCellection participated in RebelBio, the world’s first life sciences start-up accelerator programme, which is located in Cork. The accelerator was established by SOSV, the venture capital established by O’Sullivan and is led by Bill Liao. Other successful graduates of the programme include Perfect Day (formerly Muufri), which last month recently raised nearly $25 million (€20.9 million) as it seeks to bring its synthetic animal-free milk to market.

Wang said Liao was BioCellection’s first investor and that their participation in RebelBio had been helpful to the start-up.

“[Bill] believed in us when Jeanny and I were only students in college with nothing more than a science fair project to show. We owe much to the opportunity that Bill and his team have given us and we keep in touch with our friends from Cork,” she said.

So can BioCellection take their technology all the way? They are certainly optimistic about the opportunities that lie before them.

“We won’t be stopping with plastic films. We have completed early tests to prove that our catalyst and system work with other types of plastic waste as well, especially those prevalent used in packaging. We will be committing our company gains to continued R&D and are open to collaborating with academic institutions and corporates.”

Having taken an early punt on them, Liao is bullish about BioCellection’s prospects.

“They started with a great purpose to make it commercially viable to clean up the oceans of plastic. They have overcome a brace of technical obstacles and found a viable business model and the right commercial partners to scale and are now in the excellent position to succeed,” he said.