Ballyvolane House, Origin Spirits and the Blacks are all distilling exciting new drinks 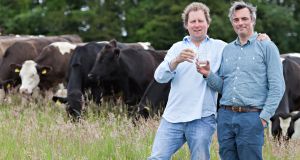 Antony Jackson and Justin Green who co-founded the Cork-based artisan distillery Ballyvolane in 2015.

The latest vintage of Irish drinks entrepreneurs have turned away from traditional products such as whiskeys and cream liqueurs in favour of more niche tipples including sloe gin, golden rum and single malt vodka.

Ballyvolane translates as “the place of the leaping heifers” and one heifer in particular, Bertha, is the inspiration behind the Ballyvolane House Spirits Company which produces gin based on whey alcohol derived from cow’s milk.

“Bertha was a legendary Droimeann cow from Sneem, Co Kerry, who died in 1993. At 48 years of age she became the world’s oldest cow and had given birth to an eye-bulging 39 calves over her lifetime,” explains Justin Green who co-founded the Cork-based artisan distillery with Antony Jackson, in 2015. “To immortalise her memory, we have brought her back in spirit, literally, and are combining whey alcohol, our own natural spring water and a mix of locally foraged and imported botanicals to create a hand-crafted gin reflecting Bertha in her prime.”

Asked how a drink can recreate Bertha in a flavour, Green waxes lyrical. “A fragrant nose, soft mouth feel and warming spicy middle notes to mirror her maternal core and a long, confident fruit-driven finish to celebrate her longevity.”

Green is a hospitality professional by training who cut his teeth in some of the world’s most celebrated hotels including the Mandarin Oriental in Hong Kong and the Jumeirah Beach in Dubai. In 2004, he and his wife, Jenny, took over the running of the historic Ballyvolane House from his parents.

“Ballyvolane House is mainly tourism-focused and seasonal so cash flow in winter was always difficult,” he says. “While looking for a way to fend off winter starvation, I had been observing the rise of the premium craft gin sector in the UK and felt it would also take off in Ireland. In November 2014, Antony and I went to London on a recce. We spent four days visiting gin distilleries and cocktail bars, talking to people in the industry and then had our epiphany . . . Bertha was born.”

However, when the founders went looking for an Irish grain spirit to base their gin on they hit a snag. “To our dismay we discovered that many craft gins produced in the UK and Ireland use a grain spirit from France because it’s impossible to source an Irish one as it’s all being used in the whiskey industry,” Green says.

Undeterred, the founders turned to the suggestion made by a legendary UK gin distiller. “He alerted us to whey alcohol and advised us to check it out as it would also tick our farm-to-fork philosophy,” Green says. “We now use whey alcohol produced by the Carbery Group in west Cork and it brings a luscious, generous mouth-feel and texture to our gin.”

The company’s first product, Bertha’s Revenge Gin, went on sale in 2015. This was followed by a seasonal sloe gin. The company’s latest product, Navy Strength Gin (about 57 per cent proof) will be launched in May. Setting up a distillery doesn’t come cheap. Green estimates investment to date at about €300,000. This has been self-funded with some help from the Mallow local enterprise office.

“Competition in the premium craft gin sector is fierce. When we started, there were five Irish craft gins. Now there are over 40 and 500 new gins have come on the market in the UK in the last 10 years. That said, the consumption of premium gin is rising globally and we are now exporting to 11 countries,” Green says.

Patrick Shelley is no stranger to premium drinks, having spent 15 years selling luxury products such as Moët & Chandon champagne across six markets including Southeast Asia and Russia. In 2013, he decided to put his experience to entrepreneurial use and founded Origin Spirits. Its first product, Kalak Vodka, was launched in 2015.

“I was struck by the fact that vodka was often more about packaging than substance,” Shelley says. “I was not a vodka drinker as I found it odourless and tasteless and I set out to create a vodka that I could enjoy – one with taste, character, purity and smoothness. I was also keen to build on Ireland’s strong drinks heritage and to create a vodka using an inherently Irish distilling process.”

It took 24 months, an upfront investment of about €200,000 and the talents of three internationally renowned master distillers to refine the product to Shelley’s satisfaction.

As a seasoned marketeer, Shelley thought hard before expanding Origin’s range but the company’s second product, Kalak peat cask single malt vodka, will be launched here in early April. “We’d noticed that Kalak was appealing to whiskey drinkers and was even gaining the reputation as ‘the whiskey-lovers vodka’ in some markets. We saw this an opportunity to create a brand extension targeting premium brown spirit drinkers,” he says. “We were very careful about maintaining our Irish ‘terroir’ approach and decided to use another inherently Irish product, peat. The new product is finished for four months in virgin oak casks which have been toasted over an Irish peat fire.

“Getting a foothold as a small company comes down to creating products of exceptional quality that will ‘wow’ international consumers,” Shelley adds. “We’re proud of being Irish, but this is more the icing on the cake. We position Kalak as a ‘single malt vodka’, not an Irish vodka. Last year, Kalak was awarded 96 points at the Ultimate Spirits Challenge, and was the second-highest-ranked vodka globally. This shows that smaller companies can create products that rival or surpass the world’s greatest.”

Maud and Sam Black are unusual in having both a craft brewery and a distillery at their facility in Kinsale. They set up their business in 2013 and started by making craft beers before adding their first still two years later. “It was a small R&D-sized unit which I used to learn how to distil in a series of small batch experiments. After a few months, I built a 200-litre still and last year we upgraded to a commercial 500-litre unit,” says Sam Black who estimates investment in the business to date at about €300,000.

The company’s lead spirit product is described by Black as a “big bold flavoursome gin” which went through 17 recipe variations before Maud Black was happy with it. “It’s what we’d consider a modern Irish gin with a unique fusion of citrus and spice with a wild Atlantic botanical twist,” Black says.

The Blacks are a creative couple and have produced a number of unusual distillations including an Irish poitín and several versions of moonshine. “These products would fit loosely into the moonshine category as they have some corn as part of the mash,” says Black. “We also did a historic recipe recreation for the Cork Whiskey Society which was made up of a high percentage of oats and barley. After distillation, it was run through a cotton bag of saffron which gave it a bright yellow colour and an amazing flavour.”

The company’s latest creation is a spiced golden rum (made with molasses sourced from Guatemala as raw material) which has taken several years to develop. “Rum takes specialised knowledge and equipment to produce and also time in oak casks to mature,” Black says. “As far as we know, this is the first rum to be produced in Ireland.”