Facebook scandal makes for a fascinating study of transatlantic irony 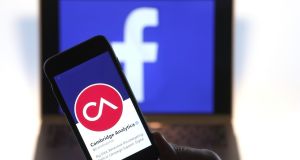 We Irish suspect that Americans just do not get irony. It often seems to go right over their heads. Of course this is not actually true. Instead, the Americans reserve their use of irony for special occasions, and where there is little danger of miscommunication. But we Irish continuously use it to tease our friends, both to depreciate but also as a sign of affection.

All of which makes the last couple of weeks a fascinating study of transatlantic irony.

It is ironic that bastions of old media have called out the poster child for new media. Facebook’s reputation for innovation has turned to hubris, under astute old-school reporting from The Guardian and The New York Times newspapers, and TV’s Channel 4 News.

Mark Zuckerberg now asserts that “protecting people’s data is at the heart of everything we do”. He adds that if “Facebook breaks people’s trust, then we should not be given that trust”. In the early days of Facebook, Zuckerberg noted that his 4,000 Harvard colleagues, each of whom had given him their private information, “trust me”. It is ironic that he then reportedly called them “dumb f**ks”.

Zuckerberg is apparently outraged by the revelations that Cambridge Analytica, as a third-party software developer accredited by Facebook, accessed and retained privacy data. It is ironic that Zuckerberg and his firm took almost three years to respond to complaints by Austrian activist Max Schrems made in 2011 about allowing third-party developers access to privacy data.

Ironically, Zuckerberg has frequently insisted that Facebook should move fast.

He has also said Facebook should break things. It is thus ironic that in a CNN interview last week he admitted that “I’m not sure we shouldn’t be regulated”.

Scott McNealy, the former chief executive of Sun Microsystems, told a group of reporters in 1999 that he believed consumer privacy was a red herring and that “You have zero privacy anyway. Get over it.” Americans have largely accepted that absence of privacy on the internet is the price for free digital services, including Facebook. In sharp contrast, Europeans have feared for data privacy, influenced by the surveillance by state intelligence services during the Cold War, particularly in central and eastern Europe.

Many Americans however now feel that a data privacy threshold has been crossed by exploitation of the internet for electoral advantage. It is ironic that rather than an American company, it took a European firm, Cambridge Analytica, to so sharply change American sentiment.

Special counsel Robert Mueller is considering interference in the 2016 United States presidential election by its Cold War rival Russia. It is ironic that the strongest ever attack on democracy in the United States has come not from Russia, but rather from a British company and its Canadian sister firm, Cambridge Analytica and AggregateIQ.

Meanwhile in Ireland, we continue to tease ourselves.

Given the growing interest in using social media by the Irish political classes, no doubt some employees at Facebook can now find out more about the private lives of specific Irish politicians than even their party whips.

Now that a threshold on data privacy for elections has been so sharply crossed in the US, our own Government has been so stirred into action that it seriously considers granting Irish political parties an explicit exemption from the new EU GDPR regulation on data privacy.

Then, in responding to a recent enquiry from TheJournal.ie, a Government spokesman said that data protection legislation does not come under the remit of the Minister with responsibility for data protection.

Last October, responding to the European Court of Justice, our Government published a revised data retention Bill to ease the two-year obligation on phone and internet service providers to retain surveillance data on their Irish customers. Meanwhile, Facebook happily collects browsing history, message content and sometimes even phone records from much of the Irish population, going right back to whenever each user first joined Facebook.

In my own case Facebook has accumulated not just two but 11 years’ worth of my own private data. Facebook also believes that I am 112, resident in Siberia and may have female tendencies. I guess that’s why I seem to see so many personal advertisements for deer antler jewellery and birch-bark coffins.

It seems that we can learn a lot of surprising things about ourselves and our society from Facebook.

Perhaps the events of the last fortnight are a catharsis. Just last January, Zuckerberg announced a major policy change by Facebook in an effort to retain the interest and dwindling attention of Facebook users. The Facebook platform will no longer emphasise content from public media and news sources, as it has increasingly done in recent years, but rather instead private posts from friends. This change in newsfeed policy has caused independent publishers worldwide to reconsider their use of Facebook.

As a result of the revelations of the last two weeks, it is ironic that the public worldwide are also likewise reconsidering their use of Facebook.