With an smartphone, you no longer had to be sitting down, ‘at your computer’, to be online 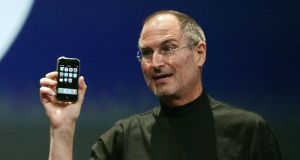 January 2007 seems both quite long ago and yet also not so dissimilar from the present. Beyoncé and Justin Timberlake were in the charts, as they are today. The eerily prescient Children of Men was in the cinemas. Barack Obama’s announcement that he was to run for the US presidency was just weeks away.

Then, on the morning of Tuesday, January 9th, there was a moment that will come to be seen as one of the most significant developments of the century. Apple chief executive Steve Jobs walked on stage at the MacWorld Expo in San Francisco and confirmed what had long been suspected: Apple was going to produce a mobile phone. But not just that.

“Today, we are introducing three revolutionary products: The first one is a widescreen iPod with touch controls. The second is a revolutionary mobile phone. And the third is a breakthrough internet communications device. These are not three separate devices. This is one device. We are calling it iPhone.”

That little slab of glass immediately caught the imagination of the tech world but, in retrospect, Jobs’s list of products he was revolutionising seems a little unambitious. With just a multitouch screen, a home button and a grid of apps, the iPhone was one of the easiest-to-use computing devices ever created, and yet it upended dozens of industries.

In a decade, photography has morphed from capturing images for posterity to ephemeral personal expression via selfies. Mapping apps have changed the way we relate to our environment, our sense of spatial awareness now mediated through the GPS chip. That has led to huge changes in urban transport, most obviously with the rise of Uber and ride-hailing apps.

The list of rivals that never recovered from Jobs’s announcement is long and storied. Nokia, RIM and, to an extent, Microsoft didn’t react fast enough to the adjusted landscape Jobs had just revealed. Google and subsequently Samsung reacted fastest, with Android growing from a decent imitation of the iPhone operating system to the de facto smartphone platform in just a few years later.

The transformative impact of the iPhone and the smartphone era it ushered in is a result of the exponential broadening of the internet it facilitated – you no longer had to be sitting down, “at your computer”, to be online. Now, we were effectively online all the time. And the comparative affordability of smartphones versus laptops meant that dramatically more people all over the world were getting online for the first time.

We have now passed 2.5 billion smartphones in use – nearly half the adults on Earth. At that scale, the transformative effect of the technology Steve Jobs unveiled a decade ago is enormous.

But while we can monitor and assess the impact of all those disruptions on business, charting financial results and stock prices, it is much harder to determine their impact on society, and on us as people. How have we changed in the past decade?

In terms of the societal impact, the naive optimism of the Arab Spring in 2011, with all those images of young Tunisians and Libyans and Iranians brandishing smartphones as they organised via Twitter and Facebook, now looks hopelessly misguided. Social media does not have a moral compass, we can see all too clearly now. The electoral earthquakes of the past year could not have happened, surely, without the transformed political discourse brought about by social media.

The decade has also significantly changed our own behaviour, for we are in thrall to the glowing screen of the smartphone. Who doesn’t feel the pull of phone in our pockets at all times, the promise of infinite information, infinite distraction, always at our fingertips? Who hasn’t felt absent in the presence of friends and loved ones, as our attention is drawn to some interruption, real or imagined, from our devices?

Without wanting to sound too much like a latter-day Socrates, warning of the perils of the written word, it is worth considering the degree to which we have outsourced our mental labour to our smartphones; why remember something that can be easily retrieved?

Perhaps it is only those of us who grew up in the pre-internet (never mind pre-iPhone) world who will experience this pang of anxiety at the changes to our mental models. Perhaps those who came of age in the past decade will be totally at home, and happy, in the fleeting interruptions and temptations of the ultimate distraction device.

Steve Jobs once described the computer as the bicycle of the mind; with the iPhone, he gave us something closer to the steam engine for the mind. January 2007 may not seem so long ago, but in the long term, it might seem like another era.