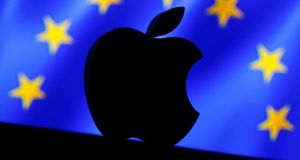 “The fact Apple could pay an effective corporate tax rate of just 0.005 per cent in 2014 while staying within the law is exactly what’s so obscene about the state of global corporate taxation.” Photograph: Dado Ruvic/Reuters

Apple’s products famously boast that they are “Designed by Apple in California. Assembled in China.” To which we might now add the coda: “Development subsidised by Ireland. ”

It’s a somewhat facile claim, of course – that €13 billion plus interest that the European Commission says Apple owes the State is not directly funding research and development in Cupertino. It has not been repatriated to the United States, for one thing.

However, there’s a neat symmetry: with interest and penalties added, the total owed is reportedly about €19 billion, or $21.2 billion – not far off the $25 billion or so that Apple spent on R&D between 2003 and 2014, the period covered by the commission’s investigation.

Apple’s R&D expenditure has shot up in the five years Tim Cook has been chief executive, to about $10 billion this year, as the company seeks the next big thing, more than likely in the autonomous vehicle sector.

But whichever way you slice it, the tax forgone by the State through the company’s unusually baroque tax arrangement here is money Apple now has, and with money being fungible, it is money Apple ultimately can spend on things like R&D.

If we are looking for positives, we can at least take a scintilla of pride in the fact we were subsidising the development of cool gadgets rather than coffee chains like the Dutch (thanks to Starbucks’ tax base there) or fast-food joints like the Luxembourgers (McDonalds, in their case).

Cook may very well be entirely correct when, in his defensive statement in the wake of the commission’s decision, he said: “In Ireland and in every country where we operate, Apple follows the law and we pay all the taxes we owe.”

But the fact Apple could pay an effective corporate tax rate of just 0.005 per cent in 2014, according to the commission’s calculations, while staying within the law is exactly what’s so obscene about the state of global corporate taxation.

A whole legion of multinational corporations can now basically exempt themselves from the responsibility of paying taxes at rates that even resemble the levels paid by citizens.

In any case, we come to this juncture, where we can legitimately debate whether Apple’s most profoundly transformative innovation of the 21st century is a computing device or an accounting trick.

However, that debate perhaps misses the larger pattern of corporate behaviour over the course of the past few hundred years. We like to think of multinational corporations as overgrown regular businesses, as if Starbucks is merely a supersized cafe, or Amazon merely a humongous retailer.

That perception makes intuitive sense, but actually, since their earliest days, they have rivalled nation states on the international stage. The notion that corporations are only now becoming a challenge to the sovereignty of the nation state is to ignore the entire history of corporations.

Consider the impact of the imperialist trading companies from the beginning of the 17th century on. Israeli historian Yuval Harari, in his terrific overview of the rise of human civilisation, Sapiens, pays considerable attention to the role played by these corporations in shaping the modern world.

The British East India Company and its Dutch equivalent, the Vereenigde Oost-Indische Compagnie (VOC), founded in 1600 and 1602 respectively, are thought of as the first modern corporations, issuing publicly traded stock and embarking on world-changing projects of imperial capitalism.

With mercenary armies at their disposal, these corporations did far more than just exploit their spice and trade monopolies. The VOC ruled Indonesia for close to 200 years, while the British East India Company did the same with large swathes of India. Inevitably, with such power came political influence.

Harari cites the first “opium war” of 1840-1842 as the “most notorious example of how governments did the bidding of big money”, with Britain receiving Hong Kong in the subsequent peace treaty.

“Today some people warn that 21st-century corporations are accumulating too much power,” Harari writes. “Early modern history shows just how far that can go if businesses are allowed to pursue their self-interest unchecked.”

In that light, the Government deciding to appeal the Apple tax ruling isn’t exactly a latter-day equivalent of China handing over Hong Kong, but it is yet another piece of evidence, if any were needed, that nation states have long been submissive to the whims of corporations.

Looked at through Harari’s long lens of history, the corporation is one of the most fundamental and transformative innovations of the modern world. The task of tempering the corporation’s voracious self-interest so that it doesn’t undermine the standards of modern democracy is one of the key challenges of our age, and it is a challenge that requires an increasingly globalised response in an increasingly globalised economy.

It certainly sounds glib to think an acknowledgment from Apple of the Irish taxpayers’ part in funding the development of iPhones, iPads and Apple Watches would in any way compensate us for the damage this saga has done to our reputation. But over the course of history, many countries have endured far worse exploitation with far less to show for it.