SpecSep product with origins in South African diamond mine 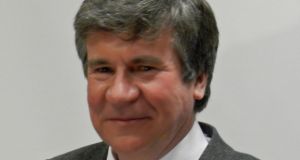 SpecSep developer Jonathan Eves: “So far we have proved the technology at UCD on a pilot plant scale and the next stage is for customers to test it in their mines.”

In 1905, the world’s largest diamond was discovered at the de Beers Premier mine east of Pretoria in South Africa. Today, the facility is known as the Cullinan diamond mine and it has an Irish connection. UCD graduate Jonathan Eves was manager of its diamond recovery concentration plant from 1990 to 1994.

It was while working with the company, initially in mining and subsequently in research and development, that the idea for his newly launched product, SpecSep began to form almost 20 years ago. “Questions come into your mind, but you’re so busy with day-to-day operations that you don’t get a chance to progress them,” Eves says. “This was particularly true in South Africa at the time as the working environment was pretty challenging with the transition from apartheid.”

However, the idea for SpecSep never went away. Roughly four years ago, Eves dusted it down and threw himself into its development. With the help of two innovation vouchers from Invest Northern Ireland, he linked up with UCD to test the product. Eves expects to sign his first paying customer shortly.

“SpecSep is designed to reduce costs and improve valuable mineral recovery by making the mining/recycling separation process known as DMS [dense medium separation] more efficient,” he says. “SpecSep increases the efficiency of DMS so more valuable material is separated out and less reagent is used in the process. This saves hundreds of thousands of tonnes of CO2 and ensures better utilisation of scarce resources. Our technology isn’t disruptive per se, but it will improve the efficiency of existing processes and because DMS is so widely used it has the potential to have a significant impact.”

Eves graduated in chemical engineering from UCD in 1983 but only a few of his classmates got employment in Ireland, then in the throes of recession. “Three of us were recruited by the mining multinational, Anglo American, to work in their research labs in Johannesburg, but I was the only one to stay on in mining and spent 18 years with Anglo American before returning to Ireland in 2002.

“During my time at the Cullinan mine, I was responsible for both pre- and post- World War II DMS plants and was surprised to find that the older plant used about a third of the reagent the newer plant required. That’s what got me thinking about what has become SpecSep,” he says.

Since returning to Ireland, Eves has worked for a gold mine in Co.Tyrone (where he developed a new system for gold analysis) and more recently has set up his own company, Eco-nomic Innovation, to develop hi-tech products with a beneficial economic twist. His first product is a patented domestic boiler that dries and heats the home while reducing carbon and NOx emissions.

Eves estimates that he has spent hundreds of hours and about €45,000 in cash developing SpecSep. “So far we have proved the technology at UCD on a pilot plant scale and the next stage is for customers to test it in their mines. Typical customers will be metal-recycling plants and all types of mines globally. What was phenomenal is how the chemical and electrical engineering departments at UCD rowed in behind me. They not only had the technical know-how I needed but also provided tremendous encouragement and practical advice that was simply invaluable.

“Most of the money spent to date has been on securing the patent, but we have now been approved for competitive start funding by Enterprise Ireland. I have recently completed the world-class New Frontiers programme at the DIT Hothouse so I’m keen to get going on commercialisation. I hope to take on my first employee in a few weeks’ time and ultimately my aim is to set up a manufacturing facility in Ireland.”