Valitacell ramps up its targeting of big pharma 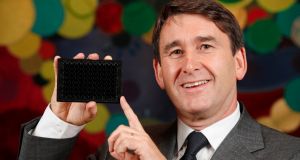 An Irish start-up has big plans to provide specialised services for the world’s biggest pharmaceutical companies. Its client list so far includes US conglomerate General Electric and biotech company MedImmune and it hopes to list two more big names within the coming six months.

The company, Valitacell Ltd, has recently located to a new base at the National Institute for Bioprocessing Research and Training (NIBRT) on the University College Dublin campus. It came to life in early 2015, but being a newcomer to the market did not stop it from claiming three prizes at the annual InterTradeIreland Seedcorn competition last month, including the top prize as overall winner selected from 300 competitors.

The award recognised the fact that Valitacell has found a very comfortable and potentially lucrative niche in the specialised area of biological drugs – drugs produced using genetically engineered cells.

There is a huge emerging market for these specialised products which have combined estimated annual sales approaching $210 billion. This group includes the important breast cancer drug Herceptin, which itself makes sales worth about $6 billion for developer Genentech.

These “biologics” are not the synthetic chemical constructs we know as drugs. They are complicated biological entities – usually custom-designed antibodies – that are too complex to be synthesised. They must be grown in host cells engineered to deliver the bio-therapeutic substance, explains Valitacell chief executive Dr Terry McWade.

He co-founded the company with fellow Irishman Dr Jerry Clifford when they became the major shareholders in May 2015. It was a spinout that had its origins in Tipperary firm Technopath, but the relevant IP moved across to the new company when McWade and Clifford emerged as investors.

“The product was under development but had the technology and had worked with biopharmaceutical companies. We were confident we had something but didn’t have a product yet,” says McWade.

They joined with academic researchers at the University of Sheffield and with MedImmune a biologics wing of pharma giant AstraZeneca to develop it further, finally coming up with a product called ValitaTITER.

“We launched our first product in March 2016, a high throughput assay for the production of antibodies,” says McWade. It was immediately useful to MedImmune which had helped with the product’s development but GE also then signed up as a customer.

Basically what the product does for these companies is save them both money and time, says McWade. The technology shortens the time needed to set up production of a biologic drug. The engineered cells carry extra DNA, the genetic blueprint that delivers the drug. They are encouraged to grow in a “bioreactor” and this can be a harsh environment.

“The challenge is not all cells will perform in a bioreactor,” he says. “Companies might screen 2,000 host cells to see which can produce the drug. Here is where we come in.”

The firm’s product helps the pharma company find the optimal host cell, with each test sequence eliminating some of the less successful host cells. “We first test to check the DNA has been taken up correctly into the cell. We select for that, then select for [drug] production. If it does not give an adequate yield it won’t be useful.”

Even if a host cell passes these tests, many will have difficulty surviving life in the bioreactor where the drug will be produced. And here is an obvious example where the service available from Valitacell can help save time and money, he says.

“The final selection is based on whether the cell remains stable in the [bioreactor] or breaks down.” The companies currently test for stability over 160 days, ensuring that the cells will do their job. “We believe we can bring that back to 30-40 days,” says McWade.

“You get the results faster so it speeds up the process, but you also get more capacity and this saves costs. There has been an explosion of molecular medicine so there is pressure to bring products forward. Costs have become important.”

Providing in-house testing for the amount of biologic produced has often been too expensive and so external alternatives have often provided this service. This would be unnecessary with the ValitaTITER product, he said. His company provides the consumables, a 96-well plate and associated substances to get the wells going, in kit form. These can be delivered to the company every month.

A single 96-well plate can be prepared in 12 minutes and read on a plate reader in 2½ minutes. Interpretation of the results using company software then adds another 30minutes. Specialist skills are unnecessary to use the product, he says.

Aspects of this technological approach will be repeated in the company’s second product, expected to be released by June 2017. It will assess potential cells for their ability to resist the stresses inside the bioreactor. It uses 20 different chemicals known to stress cells in the reactor and this should mean that promising cells can be identified more quickly, says McWade.

The world market for biologics is increasing and the company will have to expand in tandem with the industry, he believes. For this reason it is going to begin developing its in-house research capacity. “We are using contract research services from Sheffield and from the Remedi [Regenerative Medicine Institute] at NUI Galway but we have moved to NIBRT and we have a lab there. We are going to do research here and hire more people rather than contract,” he says. “We need to expand to deal with demand.”

Manufacturing is done abroad in Germany, and it will remain there until the company can scale up sales. He believes that the company will reach a turnover of $5-$6 million within three years.

Further investment is expected with private investors committed to putting €300,000 into the company early next year. Enterprise Ireland has also approved a €300,000 investment, he says. Employment growth will be in the research area, he expects.