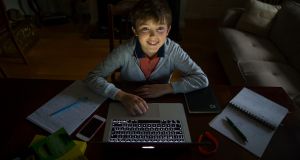 Niall Kehoe looks and sounds like an average 13-year-old boy. But he is also one of the youngest iOS app creators in Ireland, joining a growing number of young people who are taking advantage of the opportunities offered by the digital sector here.

The teenager, from Enniscorthy, Co Wexford, first got interested in coding a couple of years ago through CoderDojo – or, to be more specific, through his father, who heard about the coding club movement on the radio.

“Eventually I got really good at it,” Niall said. “I was making websites and games, and I wanted to make an app.”

iOS was his platform of choice, for a number of reasons, but mainly because he considered most of the best support to be available on Apple’s system.

There was only one problem. Although there were plenty of mentors from whom he could seek advice for his previous projects, mentors for iOS apps were a little thinner on the ground here.

He looked on YouTube for help with creating the app, but when he ran into difficulties, he needed extra support.

In a sort of last ditch effort, Niall sent out dozens of emails to people he thought may be able to help. One of those emails was to Salesforce chief executive and founder Marc Benioff.

“It was a long shot,” admitted Niall. “I was at the Web Summit in 2015 and spoke to a few executives. One of my friends had been sponsored by the company to go to Dreamforce.” That gave him the idea that maybe he could create an app for the company and win sponsorship of his own. Tech chief executives may receive a lot of unsolicited emails, but Niall’s story proves they don’t always ignore them. His email was passed from Benioff further down the line.

“I didn’t think I’d get a response at all,” Niall said. “Then Quinton got in touch.”

“When Niall reached out, it captured the attention and imagination of our senior management team,” Wall said. “We wanted to embrace Niall’s enthusiasm, support his career as an app developer, and help him join our Ohana family as one of our youngest partners.”

The “Ohana” culture was introduced by Benioff when he founded Salesforce. It’s an idea based on Hawaiian culture: family members are responsible for one another. For Salesforce that means a close-knit ecosystem of employees, customers, partners and communities. CoderDojo is just one of the organisations that has benefitted from that culture, receiving donations and support from Salesforce.

“We hope that by working with Niall, it will help him go on and have a hugely successful career in the world of technology,” said Wall. “Maybe someday he will come and work with us, or who knows, he might continue to grow his business and one day I might answer to him as an important client!”

His app, Lightbulb Notebook, went live a few weeks ago and recently made it into the App Store.

It is integrated with Salesforce’s cloud systems – you add your ideas to it and choose to save it both your phone and the cloud. The idea for it came about from Niall’s own experiences of using notes on his phone. “I like to put them into the notes but I forget about them,” he explained. Part of Lightbulb Notebook’s function is that you can set reminders for individual notes to give you a nudge when you need it.

“I was impressed by how well versed he already was with iOS development, but was able to help guide him on things like how to best use the platform, Salesforce-specific mobile requirements and some general tips on iOS development,” said Wall. “And, in addition to being able to help Niall, it is also really positive that we’ve been able to develop something that will benefit our existing customers as well.”

It all points to a bright future for Niall. He is now working on more apps. One is designed to help people with dyslexia and learning disabilities; the other is a valuation app for property. The latter came about, again, through his father,who is a valuer.

He is hoping to expand his programming knowledge in the near future, moving to develop for Android too.

“I want to be involved in computer programming down the line,” he said.

Organisations such as CoderDojo and attending events such as the Web Summit have been helpful in furthering his ambitions, putting him in touch with people working on the same platform as him and also helping him to get in touch with companies that could help.

But Niall is realistic about prospects for the future and the effect the app economy could have. “There’s no guarantee you’re going to make a lot of money,” he said. “But there are so many jobs that need coding. We need to be educating young people now in IT.”

While initiatives such as Apple’s Swift Playgrounds – a game that teaches you how to code – bring fun into it, there is more work to be done at a curriculum level. Niall has taken part in the Digital Youth Council, an initiative that gives young people a voice in how STEM subjects (science, technology, engineering and mathematics) will be treated in the education system.

Starting at an early age is key, he said, “as early as you can get them”. That could mean introducing IT in primary school, for example incorporating computer programming into maths.

Work on providing that early exposure is already under way.

David Dempsey, executive director and senior vice president based in Salesforce Dublin, said the company welcomed the Government’s intentions to introduce coding to the primary school curriculum from 2018.

“We all have a role in building the next generation of technology professionals and ensuring there is a talent pool of suitably qualified people with the right skills to fill these roles as the opportunities arise,” he said. “But of course it shouldn’t stop when you are 12 years old, it needs to be included on the Leaving Certificate syllabus so that students like Niall can nurture their talents.

“That could benefit companies such as Salesforce in the future. The European Commission estimates there could be up to 756,000 ICT (Information and Communications Technology) vacancies in Europe by 2020, exacerbated by a lack of skilled digital professionals.

“The earlier we begin educating our children, the better it will be – not just in developing their own skills but in also in protecting that talent line,” Dempsey said.