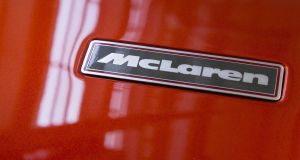 Rumour surfaced that Apple had investigated buying sports car maker McLaren, an odd-sounding acquisition that suggests Apple’s ambition to produce a car is not dead yet

When the history of autonomous transportation is written, this month just past will probably be seen as something of a tipping point, the moment when self-driving cars became a ubiquitous story, with new developments in the sector occurring every week.

Uber, the voracious ride-hailing behemoth, has in the past few weeks begun testing self-driving taxis in Pittsburgh, with customers in the Pennsylvania city able to use the Uber app to order a ride and then hop in one of a fleet of modified Ford Fusions, with only a pair of vigilant engineers for company.

Why is Pittsburgh hosting such a breakthrough in automotive history? Thank the world-leading robotics department of Carnegie Mellon University from which Uber poached 40 top researchers and scientists early last year.

Uber’s testing is far from the first driverless cars to take to the roads. Google was the first company to turn the moonshot concept of self-driving cars from science fiction to working prototype, and has been testing its driverless vehicles for years in California, Texas, Washington, and Arizona.

Singapore has embraced the future of autonomous driving with typical zeal, with a group called Nutonomy testing its autonomous taxi-hailing service in a small business district of the city state in August.

Chinese firms such technology group Baidu and ride-hailing giant Didi Chuxing are also investing in the area, and of course Uber’s scrappy little rival Lyft has joined the act, claiming a majority of its rides will be driverless by 2021, which seems unfeasibly soon.

This involved a significant downsizing of the Project Titan team, with dozens of workers laid off, but within weeks a rumour surfaced that Apple had investigated buying sports car maker and Formula One team McLaren, an odd-sounding acquisition that suggests Apple’s ambition to produce a car is not dead yet.

And that’s not to mention the efforts of incumbent automakers such as GM, BMW and Volvo, who are determined not to get disrupted out of existence.

“In the 7½ years of my presidency self-driving cars have gone from sci-fi fantasy to an emerging reality, with the potential to transform the way we live,” he wrote in an opinion piece for the Pittsburgh Post-Gazette.

“My administration is rolling out new rules of the road for automated vehicles – guidance that the manufacturers developing self-driving cars should follow to keep us safe.”

Obama captured much of the current thinking by emphasising the safety benefits over traditional cars, but the vision is very much the same as what we have now, except “drivers” are free to watch YouTube rather than the road while behind the wheel.

But if vehicles become self-driving the concept of car ownership will change dramatically – why own a car when an app can summon an autonomous taxi at a few minutes’ notice?

And if mass car ownership becomes a thing of the past, what advantage do the traditional car manufacturers have over the new entrants other than their factories?

In this sense it is useful to think of self-driving cars as having the opposite distribution path to the personal computer.

“I think there is a world market for maybe five computers,” IBM president Thomas Watson famously said in 1943, one of those hilariously short-sighted quotes that illustrate how we can be limited by our immediate experience of a technology.

Computers had few obvious mainstream applications at that time, and for many decades after that it was hard to envisage what sort of use most people would have for them. But they went from large, room-sized tools operated by large institutions to tiny devices we all carry in our pockets.

And just as early personal computers were ugly grey boxes, there is no reason to believe attractive car design will be a key differentiator. Instead, Ford and Volkswagen face the prospect of becoming the vehicular Dell, churning out functional boxes that run other companies’ technology.

Which might explain why Apple is rethinking its strategy about building its own sleek and no doubt expensive cars. It might explain why Google is in no hurry to rush out self-driving vehicles before the shift to autonomous driving has picked up pace.

And it certainly would explain why Uber is in such a hurry to make the future happen, eager to capitalise on its large user-base and expertise in routing passengers before its business model gets disrupted away from it.

As always, the future is on its way – seeing how and when it gets here is the fun part.