US researchers hoping to shed light on dark energy 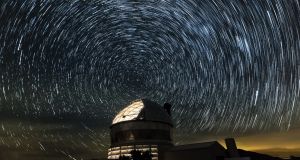 Scientists involved in the Hobby-Eberly Telescope Dark Energy Experiment at the McDonald Observatory in west Texas hope to gain a better understanding of the mysterious dark energy. Photograph: Ethan Tweedie 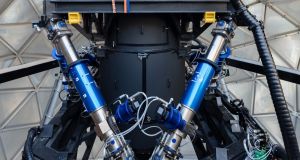 The Hobby-Eberly Telescope at the McDonald Observatory in Texas had to undergo an upgrade for the research project, with more powerful spectrographic mirrors being added. Photograph: Ethan Tweedie 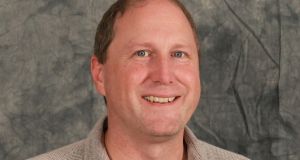 Dr Matthew Shetrone, senior research scientist at the Hobby-Eberly Telescope Dark Energy Experiment at the McDonald Observatory in west Texas. He says dark energy is “one of the great mysteries of modern astronomy”

“Astronomers have a tendency to attach the word ‘dark’ to anything they don’t understand.”

They’re not the only ones. Humans have always associated darkness with the unknown. Historians refer to Europe’s lowest period for literacy and learning as the “Dark Ages”. Colonialists described Africa as the “Dark Continent” until the region had been conquered in its entirety.

Then there’s the identification of “dark matter” as the discarnate force holding more familiar matter – such as planets, stars and gases – together.

Once more the label doth pass to civilisation’s newest “known unknown” – dark energy. This one is a doozy.

“Dark energy is one of the great mysteries of modern astronomy,” explains Dr Matthew Shetrone, senior research scientist at the Hobby-Eberly Telescope Dark Energy Experiment at the McDonald Observatory in west Texas.

While often confused, dark matter and dark energy couldn’t be any more different. The former refers to the attractive force holding galaxies together, while dark energy is the working title for the anti-gravitational force believed to be causing the universe to expand.

“You can compare the values of each and get a constant for gravity. But when one actually adds up the values of all the stars and planets we can see within a given galaxy, the math doesn’t work out. That’s because dark matter hasn’t been accounted for, the force which causes baryons [matter we understand like stars, planets and gases] to stay so tightly held together within galaxies.”

The term was first coined in 1998 by cosmologist Michael Turner and was discovered through observations of supernovae in relatively close galaxies.

“When a supernova explodes it becomes quite bright, but you can see it less and less clearly, the further away you go. So we realised they could be used as metrics – they all ignite and blow up more or less in the same way. It’s what we refer to as a standard candle: when you know the brightness of a supernova, you can tell how far away it is.”

Since the late 1990s the body of research into so-called antigravity’s impact on the universe has focused on the nearer term. “Studies based on observations of dark energy dated from around one billion years ago are ongoing elsewhere ,” says Shetrone. “What we’re trying to do is look much further back, about 10 billion years into the past.”

In so doing it is hoped astronomers will be able to determine whether or not dark energy has always been present or if it evolved in the universe later.

To do this, the Hobby-Eberly Telescope (HET) – one of the world’s largest optical telescopes, designed specifically for spectroscopy, which refers to the decoding of light from stars and galaxies to study their properties – at the McDonald Observatory had to undergo an upgrade with more powerful spectrographic mirrors added.

The HET was originally used for a variety of astronomical and cosmological studies. It is almost a decade, however, since the bold decision was made to stop conducting any experiments unrelated to dark energy during the hours of the day when the moon is down so that they could try and gain more insight into what is still one of the more unknown knowns.

“We needed a brand new instrument with a wider field of view on the sky,” says Dr Shetrone. “The top end of the telescope is bigger and heavier, almost like we have put a macro lens on a camera.

“We also had to include new software systems, meaning all old operations had to stop while we replaced everything. It has taken three years to achieve this.”

The Hobby-Eberly Telescope Dark Energy Experiment only began their research in December 2016. So the research group is literally starting at the very beginning.

Dr Shetrone is philosophical about embarking on a research project with so little existing research to work with. “Astronomers have a tendency to attach the word ‘dark’ to anything they don’t understand,” he says.

“If you look back over astronomy, you’ll learn how in Einstein’s day we interpreted the universe to be this static entity. Then Hubble showed the universe was expanding, but when we looked in more detail we found it was expanding faster than the speed of light.

“So every time we start to get a handle on things, some new mystery far stranger than anything that has come before, reveals itself. Our attempts to force models on to the universe are so that we can tell ourselves we understand it. That doesn’t mean the universe will obey.”