NY designer says he wants to make people aware of the environment. But at that price? 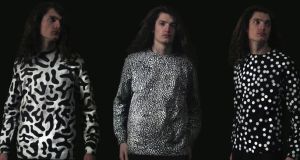 Outdoor air pollution has grown by 8 per cent around the world in the past five years, according to new data by the World Health Organisation. Some of the world’s biggest cities have significantly high pollution levels.

Take New York, for example. A recent NYU study looked at the health of 300,000 residents and concluded that individuals living in zipcodes with higher concentrations of pollution – as measured by the US Environmental Protection Agency – had a 24 per cent higher chance of having artery constriction.

Now, a New York City-based designer thinks he might have the solution. To the awareness problem, at least. Nikolas Gregory Bentel recently released a new line of long-sleeved shirts called Aerochromics, which change colour according to pollution levels in the air. The shirts are priced starting at $500 (€480).

“Aerochromics is a statement on the rapid deterioration of our world’s air quality,” Mr Bentel says. “Air quality is only one small part of the larger spectrum of the pollution that we are slowly seeing taking hold of our planet.”

The shirts are available in three black-and-white designs, and took Mr Bentel a year to develop. The shirts track different pollutants – carbon monoxide, particulate pollution and radiation – and work similarly to a household carbon monoxide detector. Chemical salts turn carbon monoxide into carbon dioxide, and that oxidation process transforms the colour of the shirts.

While countless smartphone apps can tell you pollution levels, Mr Bentel argues that rather than turning to phones, tablets and computers that have to be carried around, apparel can do more than just be a fashion statement.

“The shirt forces the user to be aware of pollution levels constantly,” he says. “I wanted to apply this tech to an object that was already being used without hesitation every day and was visible from any direction.”

To test particle pollution – one of the biggest concerns for cities with low air quality – Mr Bentel’s shirts use two sensors placed in the front and the back. A micro-controller in the shirts’ collar activates heat pads, changing the shirts’ colours from black to spotted.

According to the US Environmental Protection Agency, anything above 51 on the Air Quality Index (AQI) is a “moderate” health concern. Aerochromics shirts go into effect at 60, slowly shifting to the black-and-white pattern. But as the AQI escalates, reaching 160, or “unhealthy”, the shirts’ complete pattern becomes apparent.

A different version of the Aerochromics shirt changes permanently when exposed to radiation. Exposure of gamma or electron beam radiation causes dyes in the shirt to change colour. Once the shirt is exposed to significant amounts of radiation, it remains in that colour and pattern.

Funded personally through income from his design studio in Queens, Aerochromics is not Mr Bentel’s first venture. He also created Ripley, a ring that gets its oxidised finish by going through a person’s digestive system; Data Arbitrage, a program that floods the market with fake social media accounts to dilute data resale values; and Higher Tides, a fake estate agency that claims to help buyers find property that would retain value after the impact of climate change.

Considering this background in art-meets-activism, it’s unclear who, exactly, these shirts are targeted at. Mr Bentel says he has a “stream of customers”, but refused to provide any more information, or access to them.

However, he promises the cost of the shirts will fall in the future, making them more reasonably priced.

“This was my first product run for the shirts so I wanted to be sure there was a demand before bringing down the cost,” he says.

Mr Bentel also says a number of academic institutions and commercial companies have reached out to him about the shirts, but withheld names.

“I am not too interested in selling a lot of the clothing,” Mr Bentel says. “The online shop is secondary to the concept. I see Aerochromics first as a statement.”

So is it business or is it art? “This seems like a novel type of clothing line that might, because of the novelty, become fashionable,” says Mark Jacobson, professor of civil and environmental engineering at Stanford University.

Aerochromics isn’t the first project to blend air pollution concerns with technology and fashion. In 2011, two New York City students designed sweatshirts that changed colour when met with high levels of carbon monoxide. More recently, Kasia Molga, a British artist and designer who suffers from asthma, premiered a new line of wearable technology that responds to air quality. The project, titled Human Sensor, made its debut in Manchester’s industrial hub, as models paraded around the city in the futuristic designs, illustrating how pollution levels change.

But, for all the efforts to raise awareness, Aerochromics doesn’t actually offer any practical solutions. The shirts are made with conventional cotton, not organic cotton, which has been criticised by environmentalists for harsh use of pesticides and insecticides.

Whether Mr Bentel’s shirts will change the dialogue on urban pollution remains to be seen.

“It makes people more aware of the pollution around them,” Prof Jacobson concedes. In particular, he points to the air pollution and carbon monoxide shirts. If these change colour when exposed to cigarette smoke, which contains both ingredients, it could be a deterrent to smoking as well. “It might make smokers more cognisant of the pollution they are inflicting on non-smokers,” Prof Jacobson says.