In a Trumpkin world truth and facts have lost all value

Impact of fake news must be acknowledged by Zuckerberg 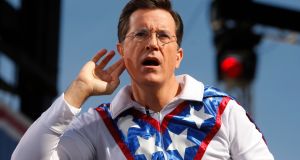 “Reality has a well-known liberal bias,” as US comedian Stephen Colbert once put it, lampooning George W Bush, who was sitting just a few feet away at the 2006 White House Press Correspondents’ Dinner. Bush looked mightily peeved at the gag, but it turns out the joke was actually on Colbert, and indeed on all of us who believed that reality, and related concepts such as truth and facts, were actually important.

If the 2016 US presidential election has proven anything, it is that truth and facts have lost all value in public life – for not only was Donald Trump the most egregiously mendacious candidate in modern history, it is now obvious he was actually rewarded for his mendacity.

It is not for nothing that the Oxford English Dictionary has declared that “post-truth” is the word of the year, for no concept so thoroughly captures the Orwellian state of affairs we currently face. In a world where facts, evidence and expertise are no longer valid currency in the marketplace of ideas, we end up with Brexit and President Trump, ludicrous ideas that are willed in to existence through a sustained denial of evidence.

Facts don’t just disappear by themselves, of course – rather, their decline is the result of the years of changing media consumption patterns. The technology industry, and Facebook in particular, has been involved in a painful bout of self-examination this past week over suggestions that it has played a part in the rise of political polarisation and Trumpism through the spread of highly partisan “fake news” stories from spurious websites.

Mark Zuckerberg was disdainful of the suggestion Facebook’s news feed might have played a role in Trump’s triumph, calling it “a pretty crazy idea”. This is disingenuous defensiveness on Zuckerberg’s part – he can’t claim the social network is a powerful advertising platform on the one hand and incapable of altering people’s opinions on the other.

Zuckerberg has created a network that some 44 per cent of Americans rely on to get their news, but has shown no inclination to step up to his responsibilities as a powerful publisher which would very much involve preventing the spread of fake news. A Gizmodo story this week suggested that an attempt to identify bogus news stories was shelved as a higher proportion of targeted stories were coming from conservative sites, and management is still cautious after getting scorched with the controversy over trending topics editorial staff supposedly favouring “liberal” news sources earlier this year.

Perhaps more fundamentally, polarisation is exacerbated by the filter bubble effect of the social network, in which algorithms provide people with more of the content they are likely to click on, creating all sorts of perverse incentives for publishers to leverage the echo chambers. For instance, Buzzfeed exposed a Macedonian village that was a lucrative pro-Trump fake news farm, with teenagers running dozens of sites pumping out bogus stories that were eagerly consumed and shared by Trumpkins eager to hear about Hillary Clinton’s supposed crimes or how Pope Francis was endorsing Trump.

“Identifying the ‘truth’ is complicated,” Zuckerberg wrote in defence of his company’s inaction. As a first response to the problem, both Facebook and Google announced plans to ban fake news sites from using their advertising networks.

But to understand the larger impact of social media on the dissemination of information, it is important to understand the Overton Window, a concept that describes the range of acceptable political discourse on any given topic, limits usually determined by ruling elites.

For instance, in the past, the appeal of Trump, or indeed Bernie Sanders, would have been severely constrained by the unwillingness of mainstream media outlets to cover them and treat their campaigns seriously. The declining influence of newspapers was particularly felt this year – all the prominence given to instant fact-checking by media organisations during this election cycle, and all the editorials endorsing Clinton, appeared to count for little.

The gatekeeper role played by the media had its serious flaws, of course, in that it effectively silenced large parts of the political spectrum. Some of those silenced viewpoints, such as advocates for minority rights, absolutely needed to be heard; others, such as the extremist far right, were probably better off ignored and marginalised.

But social media has changed the dynamic of information flows dramatically, with the result that the Overton Window has not just been opened wider than ever before, but it has ripped a huge gaping hole in the side of the wall, a rift so wide that the structural integrity of the whole building is threatened.

As the third US president Thomas Jefferson famously put it: “Whenever the people are well-informed, they can be trusted with their own government.”

Silicon Valley has a lot to reckon with as the US struggles with its growing and dangerous divisions; whether its form of disruptive innovation is equipped to tackle this particular challenge, or if it actually risks exacerbating them, may well determine the future of democracy.